Is it OK to call in sick with a common cold? 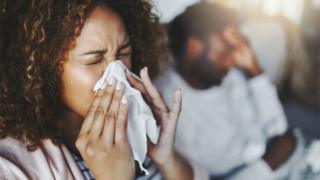 Should she be sent home to rest on the sofa, or encouraged to work through her cold?

“For goodness sake, just go home,” my boss implored. “People are complaining and don’t want to catch your disgusting germs!”

My protests of “it’s just a cold – I don’t feel that bad” fell on deaf ears and I had to admit defeat gracefully rather than being frogmarched out of the newsroom.

While I wasn’t feeling 100%, in my mind I certainly wasn’t poorly enough to justify spending an afternoon under a duvet.

But forget Brexit – nothing seemed to divide my friends, colleagues and random social media posters more than the thorny question of whether you should call in sick with the sniffles.

Opinions varied from “oh for heaven’s sake, just grow a pair” via “ooh, that’s a really tricky one…” to “how very dare you infect your poor colleagues, you selfish…”

And so I found myself entering the murky moral maze that brought together employment law, ethics and public health.

Many types of viruses can cause a common cold, with rhinoviruses the most common culprit

When is a cold more than a cold?

Colds are everywhere – on the tram, in the supermarket, in the playground. So unless you plan on not leaving the house EVER, someone will infect you.

So why are so many people agitated, I wondered to myself? Surely it’s just part of winter?

“Colds are viruses and we react differently to them – we can’t underestimate how lousy some people feel with a cold,” said Rachel Suff, senior policy adviser at the Chartered Institute of Personnel and Development (CIPD).

“If you are really not well and your symptoms mean you are not going to be productive it’s better to go off sick. You’re also not spreading your germs around the workplace.”

Prof Martin Marshall, chair of the Royal College of General Practitioners, agreed that “every patient is different, and each one experiences illness differently”.

But should we all be desperately trying to avoid colds? Aren’t they great at building up our immune systems?

Prof Peter Openshaw, former president of the British Society of Immunology, who has done research in this area for more than 25 years, says colds can be good for our long-term health, but only sometimes.

It turns out there are “good colds” and “bad colds”.

“It’s my life-long quest to find out which viruses are ‘good’,” he said, “because some colds seem able to put your immune system through some kind of training course.”

What about those with compromised immune systems?

One former colleague told me: “When my mum was seriously ill [with cancer] I got a chest infection after a colleague was ill and couldn’t see her for three weeks and had to get carers.”

While she conceded that she “could have got it from anywhere… I can guarantee being next to someone sneezing all over the desk didn’t help!”

Prof Marshall suggests people, particularly if they are in caring roles, should “take into account factors such as… whether they are likely to come into contact with vulnerable groups, such as young children, pregnant women, or the elderly”.

Hayley Johnson, an employment lawyer at Slater and Gordon, also pointed out the implications [of catching a cold] for people with cystic fibrosis or who have recently had chemotherapy for example can be incredibly serious.

Anybody fancy joining me for lunch? Anybody?

Have attitudes shifted in recent years?

It would seem so.

The CIPD reported the typical employee’s number of sick days dropped to 5.9 in 2019 – the lowest in the 19-year history of its annual survey of UK HR professionals.

That may explain why 83% of them have observed people going to work when they were ill. Or that 63% had witnessed colleagues working while on annual leave.

It’s all tied up in workplace culture, said Ms Suff. “We know a lot of people can’t cope with their workloads… People know that by not being there, there will be extra work for their colleagues.”

Ms Johnson said that in recent years employers have tended to be “much more across sickness records” than was previously the case, especially when it comes to “frequent, intermittent absences” of a few days here and there.

She thinks this is because “budgets are so tight nowadays that you’ve often got every employee doing the work of one and a half people”.

Sometimes members of staff feel obliged to work when they are sick “because they fear the mountain of work will just keep piling up” for when they return.

Should your decision depend on who you work for?

“When somebody’s got a cold we send them home,” said Paul Knowles, from Acoustic and Engineering Consultants Ltd in Marple, Cheshire.

“There are only six of us and so if three or four catch it and can’t work we are struggling to keep our clients happy.”

Mike Cherry, national chairman of the Federation of Small Businesses, urged those working for smaller companies not to be scared to talk to their boss.

“So in situations where a member of staff is feeling under the weather – but still well enough to get stuff done – it can be more straightforward to arrange a day working from home.”

Finally, we should all spare a thought for freelancers and the self-employed, Mr Cherry said.

“The luxury of statutory sick pay is not available [so] the tendency to just crack on with it – for better or worse – is much more prevalent among sole traders.”

Could I get sacked for calling in sick with ‘just a cold’?

“Ultimately employees don’t have to be bed-bound to be unfit for work,” said Ms Johnson. “GPs are quite happy to sign people off with what many people would regard as a low-level virus.”

She suggests a pragmatic, common-sense approach, based upon mutual trust.

“Employers can sack people who they think are lying,” she said, giving a hypothetical example of “somebody who calls in sick but then posts photographs of themselves [on social media] having afternoon tea with prosecco!”

But the fact so many employers are willing to take their employees’ word for genuinely being sick suggests there is at least a basic level of trust.

Should dogs get duvet days too?

So what have I learned?

From examining all of the issues involved, I’ve come to the conclusion that maybe I should count my blessings, and be more mindful of those with severely compromised immune systems.

And if I am horribly infectious but not feeling too bad, perhaps I should be kind to myself – and everybody around me – by working from home until the lurgy blows over.

At least my dog Biscuits will be happy to see me…