Is this the in-flight meal tray of the future? 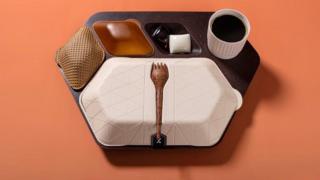 The new tray designed by PriestmanGoode

Squeeze and settle into your chair on a long-haul economy flight, and you might be offered a drink, in a plastic cup, which you’ll stir with a plastic stick.

Put together, that contributes to the 5.7 million tonnes of cabin waste from passenger flights each year.

A new exhibition at London’s Design Museum aims to rethink the waste we generate when we travel.

Design firm PriestmanGoode has worked up an environmentally-friendly version of the traditional economy meal tray.

The base is made out of coffee grains, it uses a waffle cone for the desert dish, and algae skins contain milk and vinaigrette. The salad pot is made from a pressed banana leaf and the “spork” (a spoon and fork combined) is made from coconut wood, a cheap and easily-available material.

The product’s designer, Jo Rowan, says: “It’s about weight as much as waste. When it comes to flying, lighter weight means less emissions”.”

It’s perhaps far too beautiful (and expensive) to grace the average economy flight, but it does highlight how small changes could have a massive environmental impact.

Just some of the waste from an average passenger on a 12-hour flight.

Most airlines are taking simple steps to reduce passenger waste and nudge behaviour.

Virgin Atlantic has started putting its headphones in a charity donation envelope and it no longer offers packs of toiletries in economy as a matter of course. Instead, passengers request them from cabin crew.

Meanwhile, British Airways has saved 30 tonnes of plastic a year by cutting the wrapping around its amenity packs and replacing its plastic swizzle sticks with a bamboo alternative.

Qantas has trialled a zero-waste flight and aims to eliminate 75% of its waste in the next two years.

Dealing with the rubbish

When waste lands at an airport, there’s a limit to how much can be recycled – due to differing international regulations.

For example, 90% of rubbish that comes through London’s Heathrow can’t be recycled in the UK. Instead, it is burnt or sent to landfill because of concerns about biosecurity.

Matt Gorman, head of sustainability at the airport, explains: “We can’t recycle as much as we’d like to because waste might have food or liquid that has ‘contaminated’ it from outside the European Union.”

He says the airport wants to see a more measured approach to regulation.

“What we’re keen to do is to say when a flight has come from somewhere like America, where food regulation is similar to the UK’s, we’d like to be able to recycle more of that waste.”

It’s an approach supported by the International Air Transport Association.

Meanwhile, the EU is running a trial in Madrid that it hopes will address the problem. Working with Spain’s biggest airline, Iberia, and suppliers, it’s trying to find a way to allow more cabin waste to be recycled. The trial concludes in December.

A spokesperson for the UK government’s Department of Environment Food and Rural Affairs says: “While leaving the EU means there is scope to change the rules after 31 October, maintaining high biosecurity standards to stop diseases reaching the UK from abroad remains our priority.”

The responsibility for reducing plastic use also lies with passengers.

Jo Rowan from PriestmanGoode hopes that the exhibition at the Design Museum will go some way to changing people’s travel habits when they’re on the go.

“When they’re flying people think: ‘Oh it’s only a one off’, but that all adds up and if everyone does that, we have a big problem,” she warns.