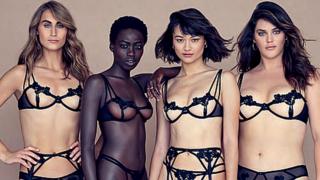 This week has been a big one for the lingerie industry.

Victoria’s Secret – home of the impossibly-sculpted, minutely-clad supermodel – unveiled the first “plus-size” model to grace its stores in its 42-year history.

As part of a campaign with British lingerie firm BlueBella, the US underwear giant is featuring body positive campaigner Ali Tate Cutler in its shops alongside transgender model May Simón Lifschitz.

It is a far cry for a company which, in the words of its now departed chief marketing officer, Ed Razek, had no interest using “plus-size” or transgender models, who the septuagenarian referred to as “transsexuals”.

The reaction to the Victoria’s Secret-BlueBella campaign, entitled #loveyourself, has been surprise.

Model and influencer Elenna Owen, 22 who attended the launch at the Victoria’s Secret Bond Street store in London, said: “Victoria’s Secret models are usually very skinny and tall and in the past they made a big fuss about not using other types of models.”

Out with the old? Viewers of Victoria’s Secret’s annual show hit a record low last year

“To be honest, I’ve never been interested in Victoria’s Secret because I’m more on the curvy side myself and it doesn’t really relate to me.

“But now I would be more open and in general…when brands celebrate curvier women I’m more inclined to shop there.”

Could it be that Victoria’s Secret is finally representing all women of all body types?

The answer is not quite.

Ms Tate-Cutler, who is a UK size 14 to 16, and May Simón Lifschitz are employed by BlueBella, not Victoria’s Secret.

A recent campaign Victoria’s Secret ran featuring the models Solange Van Doorn was also a collaboration, this time with LA-firm For Love & Lemons.

And while Victoria’s Secret’s sister brand, Pink, used its first trans model this year when it hired Valentina Sampaio, the bigger lingerie group is yet to really commit to a fundamental shift that has taken place in the industry.

The company has been “slow to implement meaningful change”, according to Citigroup analyst Paul Lejuez, who said that “cultural norms” were “shifting away” from Victoria’s Secret.

The Love & Lemons campaign, which Victoria’s Secret describes as a “north star” in terms of where its marketing is heading, was only launched in September.

“Styles like bralettes and triangle bras have risen to the fore whereas push-up bras and balconette bras used to be the drivers of the market,” says Ms Carter.

UK retailers have, for example, stocked 39% more triangle bras this year compared to 2018.

Societal changes are also influencing what woman want to see from retailers, including the #metoo movement, which gained momentum in 2017 following widespread allegations of sexual abuse against film producer Harvey Weinstein,

Ms Carter says that female empowerment has “eclipsed outdated ideals of what sexy is”.

She says it is “about women dressing for themselves [and] no longer needing to conform to the stereotypical views of lingerie”.

Maria Stockova, 26, from the Czech Republic, says that Victoria’s Secret is “sometimes too sexy”. Nevertheless, she is a fan of the brand and was happy to see Ms Tate Cutler in its store “because I am not thin”.

Though when asked about how he was positioning the company against this backdrop, his answer was somewhat garbled: “The feedback that we get from the social component of the business and the #metoos and some of all of that sort of blended all together, we’re going to be responding to.”

The lack of clarity over its marketing has affected sales at Victoria’s Secret.

It is still a huge brand, with last year’s revenue reaching $7.3bn, but its like-for-like store sales – which ignore the boost that a retailer gets from opening new stores – have been heading in the wrong direction for some time.

In contrast, brands who have fully embraced showing all sorts of women in their marketing, have thrived.

Aerie, the clothing firm owned by American Eagle Outfitters, launched a campaign in 2014 using models with no airbrushing. It recently reported a 16% rise in like-for-like sales for the three months to 3 August – its 19th consecutive quarter of double digit growth.

Victoria is not just a name used by the firm to sell underwear. she is a collection of ideas about who the company’s customer is, according to Mr Mehas.

He said: “She’s college educated. Her parents are French and English…we’ve updated it a bit…she’s a USC film student now and not fully at Oxford.

“She’s got a fabulous life, she’s travelled around the world…and she’s in her late 20s, really early 30s, cosmopolitan, has a lot of friends.”

One tangible thing Victoria’s Secret is doing is “re-evaluating” its flashy annual fashion show, famed for the procession of so-called “Angels” in wings, high heels and underwear.

The televised catwalk show that once drew viewers of 12.4 million, pulled in just 3.3 million viewers in 2018 – a record low.

It has arguably been eclipsed in recent years by Savage X Fenty, the lingerie line by singer, actress and businesswoman Rihanna, whose events showcase a huge range of body types.

Perhaps one of the reasons Victoria’s Secret has struggled to find its way in recent years is the turmoil both inside and outside the company.

As it prepared to unveil the #loveyourself campaign with BlueBella, it emerged that Victoria’s Secret executive vice president of stores, April Holt, was stepping down.

The company also said it was laying off around 15% of its staff at its Ohio headquarters.

The late US financier, was a long-time financial adviser to Les Wexner, the billionaire founder and chief executive of L Brands, the parent company of Victoria’s Secret.

He died in prison in August, while awaiting trial for sex trafficking charges in August.

At L Brands’ investor day last month, Mr Wexner made it clear he was keen to move forward – as is Victoria’s Secret.

Mr Mehas assured shareholders that they would soon “start to see an evolution”.

“For us, it is being very thoughtful about this precious brand that has been built over the course of 30-40 years,” he said.

The campaign with BlueBella could give Victoria’s Secret a much-needed injection of energy.

Kate Ormrod, lead retail analyst at WorldData said it is a “good step” for the company.

“But perhaps it is a little late in the day.”

Victoria’s Secret declined a request for an interview.