Jailed Post Office worker: I wanted to kill myself 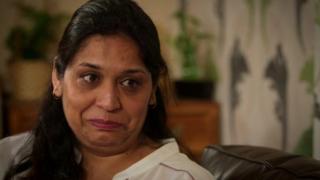 Seema Misra was pregnant when she was jailed

Seema Misra was pregnant with her second child when she was convicted of theft and sent to jail in 2010.

“If I hadn’t had been pregnant, I definitely would have killed myself,” she said. “It was the worst thing. It was so shameful.”

Seema is one of the hundreds of Post Office workers – mainly sub-postmasters – who were accused of theft after using the Post Office Horizon IT system, which is provided by Fujitsu.

The Post Office has agreed to pay nearly £58m to settle with 557 claimants after a long-running dispute over the system.

In addition, the Criminal Cases Review Commission is looking into whether a number of the convictions were miscarriages of justice.

Seema became a sub-postmistress in West Byfleet in Surrey in June 2005 and was suspended in January 2008 after an audit found a discrepancy of £74,000 in her accounts.

She had been feeding at least £100 per day from her shop into the Post Office tills, because of discrepancies in balancing the accounts. One day there was a £10,000 hole.

This went on for two years, she said, with very little support from the Post Office.

She balanced the Post Office books by transferring takings from her shop, but sometimes that wasn’t enough, and so she ended up borrowing money from relatives.

After an audit, the Post Office sent her a court summons and a jury found her guilty.

Seema was sent to Bronzefield Prison, where she was locked up with “drug addicts and people self-harming”.

“I was so scared,” she said. When she rang home, “on the phone, there would be blood”, she said.

While she was in prison, her husband was beaten up on a number of occasions by locals who had heard about her case through the local newspaper, which she said characterised her as “a pregnant thief”.

The couple decided to move from West Byfleet, but her ordeal lasted far longer than her sentence.

They lost the Post Office business and their house, and found it difficult to rent accommodation because of her conviction.

Seema became a virtual recluse, scared to go out into the local community and make friends in case they found out about her conviction, and unable to find work.

The situation has only started to ease over the past few years as question marks have repeatedly been raised over the convictions.

“After seven years, we have celebrated our son’s birthday for the first time this year,” Seema said.

The Post Office settlement is “a step in the right direction”, she said, but she is now focused on trying to get her conviction overturned.

Tracy Felstead was just 19 when she was sent to Holloway Prison, which once housed the likes of Myra Hindley and Rose West.

She was accused of stealing £11,503.28 – a number that seems to have been engraved into her memory – while working at Camberwell Green Post Office.

Tracy, who was not one of the claimants in the case, says: “Because I wouldn’t say sorry, I got put in prison.”

She had been away from work on holiday, and when she came back, “there was no evidence of where the money had gone,” she said.

Without her knowing, Tracy’s family had actually paid the money back in an effort to stop her going to jail – an effort which ultimately failed.

While in jail, she saw a girl who had hanged herself.

The after-effects for Tracy have been severe. Because of the conviction, she lost her job and her house. She is having counselling.

Rubbina Shaheen is one of the sub-postmasters and postmistresses fighting to clear her name.

She ran the Greenfields post office in Shrewsbury and was convicted and jailed in 2010.

“When he [the judge] said I’m going to prison, I was just totally devastated. I didn’t know what to say, what to do, honestly.”

Her husband, Mohamed Hami, said: “As it is, there is a tension of balancing all this cash up, and having a discrepancy creates [a] total nightmare for her.”

After Rubbina was sent to prison, Mohamed said: “My concern more than anything was if she was being bullied – and she was on suicide watch.”

They lost the Post Office, shop and home. Rubbina is not one of the 557 Post Office claimants, but is now hoping her conviction will be overturned.

Rubbina adds: “I hope we get justice for it, I hope we get an apology from the Post Office for what they’ve put us through, and learn from it, basically, most importantly, so other people don’t suffer like we did.”