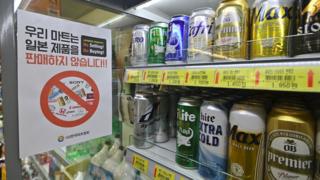 This sign in a grocery shop in Seoul says “This store does not sell Japanese products!”

Official figures on Thursday showed Japan food exports were down 58.1% in October, according to broadcaster NHK.

What began as a diplomatic feud over wartime labour compensation has evolved into a trade row between the countries.

Beer-sellers have been among the hardest hit. Japan shipped 800.34m yen ($7.3m; £5.6m) worth of beer to South Korea last October, according to news agency Kyodo.

South Korea is one of the biggest markets for Japanese beer, accounting for about 60% of total overseas shipments last year, Kyodo said.

Tensions between the two countries flared in July when Japan tightened controls on South Korean exports, targeting materials used in memory chips and display screens that are vital for local companies such as Samsung.

Both countries later struck one another off their list of trusted trade partners.

That has had an impact, with NHK reporting Japanese exports of equipment used in the manufacture of semiconductors slid 49% last month.

Still, there have been some recent signs of a possible thaw in relations.

Last week South Korea agreed to continue a military intelligence-sharing pact with Japan that had been threatened by the dispute.

The move was welcomed by the US which had urged the two countries to settle their differences.

How did the trade rift begin?

The trade dispute has been fuelled by diplomatic tensions over compensation for wartime labour.

The decisions drew condemnation from Japan, which argues the dispute was settled in 1965 when diplomatic ties were normalised between the neighbouring countries.