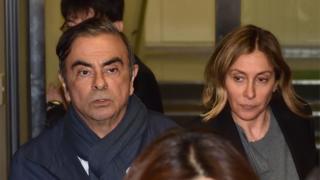 Tokyo prosecutors have issued an arrest warrant for the wife of fugitive ex-Nissan boss Carlos Ghosn.

Carole Ghosn is suspected of making false statements to a Tokyo court in April, investigators said.

A spokeswoman for the Ghosn family said the arrest warrant for Mrs Ghosn was “pathetic”, and was linked to a news conference due to be given by Mr Ghosn on Wednesday.

Japan is seeking Mr Ghosn’s extradition from Lebanon, although the country does not have a treaty with Japan.

A spokeswoman for Mr Ghosn told Reuters: “Last time Carlos Ghosn announced a press conference and got re-arrested. This time, the day before he is announced to speak out freely for the first time, they issued an arrest warrant for his wife Carole Ghosn.”

“The issuance of this warrant is pathetic,” she added.

Mr Ghosn ran car giant Nissan until he was arrested in Japan on charges of financial misconduct – which he denies – in November 2018.

He was banned from seeing his wife while on bail. But, in the final days of 2019, he skipped bail to board a private jet that took him to Turkey before he travelled on to Lebanon, where he is a citizen, and where his wife was waiting.

Mr Ghosn insisted he had organised his escape “alone”, and denied reports his wife had helped.

The arrest warrant accuses Carole Ghosn of falsely claiming not to know, or to have met, people connected to a company that received payments from Nissan, part of which was subsequently transferred to a firm owned by Mr Ghosn.

In April, prosecutors seized Mrs Ghosn’s Lebanese passport, but failed to find her US one.

The Financial Times reported on Tuesday that the arrest warrant could be designed to target Mrs Ghosn as a US passport holder – Japan has an extradition treaty with the US.

Mr Ghosn has denied charges of financial wrongdoing in Japan, instead claiming the country’s justice system is “rigged”.

The news conference scheduled for Wednesday will be Mr Ghosn’s first since his arrest in November 2018.

Mr Ghosn told Fox Business that he has “actual evidence” that proves there was a coup to stop him merging Nissan with French carmaker Renault. He also said he would identify people at the news conference that he believed were behind his arrest over financial misconduct.

In earlier court filings and statements released by his lawyers in Japan, Mr Ghosn has accused Nissan executives of colluding with Japanese prosecutors and officials from the Ministry of Economy, Trade and Industry.

Nissan said Mr Ghosn’s flight from Japan would not affect its policy of holding him responsible for “serious misconduct”.

“The company will continue to take appropriate legal action to hold [Mr] Ghosn accountable for the harm that his misconduct has caused to Nissan,” the carmaker said.