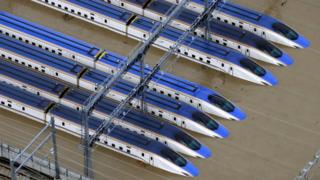 The Hokuriku-Shinkansen line trains were parked in a yard in Nagano city.

Typhoon Hagibis struck with winds of 225km/h (140mph) on the weekend of 12-13 October, killing about 90 people and displacing thousands with flooding.

It was the country’s worst storm in decades.

The images of the parked trains with floodwater lapping at them became symbolic of the extent of the damage. 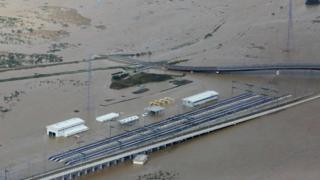 The trains each had 12 carriages. They ran on the Hokuriku-Shinkansen line connecting Tokyo with Kanazawa on the west coast.

East Japan Railway Company’s president Yuji Fukasawa said at a press briefing on Wednesday the floodwater had damaged many key components, including motors and braking systems.

He said that “in terms of stability and safety it is appropriate” to scrap the trains and bring in new ones.

His company owned eight of the trains. The other two, owned by the West Japan Railway Company, will also be scrapped.

The trains at the time of the flooding made up one-third of the services on the line.

“We aim to restore 100% services [on the line] by the end of the current business year [in March],” Mr Fukasawa said.

It is currently operating at about 80%.