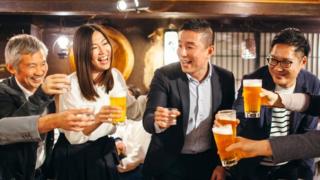 Riku Kitamura remembers his first “drinking party” as a new graduate in Japan. The 28-year-old worked for a market research firm and the team would regularly socialise over drinks in the evening.

Drinking with colleagues after work has long been part of Japanese culture. Nomikai, or drinking gatherings, are seen as central to building strong relationships.

But in some offices, those gatherings have become less frequent as concerns over power harassment grow. That’s taking away a path many workers in Japan traditionally relied on to get to know their boss.

Essentially workplace bullying, power harassment ranges from isolating an employee to physical abuse by a superior.

“Forcing people to go to a drinking party is sometimes seen as harassment,” says Kumiko Nemoto, professor of sociology at Kyoto University of Foreign Studies.

“In the past, it happened all the time. It was part of normal corporate culture in Japan but now it’s seen as power harassment.”

The government wants to introduce rules for employers to prevent power harassment from next year. The move is part of a wider effort to stamp out harmful workplace behaviour in a country known for punishing hours and even death caused by overwork.

Against this backdrop, some managers are hesitant to invite their staff to drinks after work.

Mr Kitamura says over the last three years, bosses have been clear that drinking isn’t compulsory. “Managers are afraid of a backlash,” he says. “I can definitely feel that the managers aren’t pushing it [and] trying to avoid the risk.”

Among them is 47-year-old Tats Katsuki. Mr Katsuki, a manager at a Japanese trading house, admits he doesn’t ask his team to go out drinking as companies take a tougher line on harassment.

That awareness has spiked over the past five years, and individuals “get fired all the time now for this kind of stuff,” he says.

“Subordinates can always anonymously email or write letters to… a complaints box. People are much more aware and prudent.”

It’s a far cry from the Japanese workplaces Mr Katsuki began his career in more than two decades ago.

Back then, he says there was a “different mentality”. He’d go out drinking with colleagues in Tokyo up to four times a week.

“Your boss would say, are you free now? Let’s go. There was really no way of saying no,” Mr Katsuki says.

The party would carry on after client dinners, sometimes into the early hours. He felt he was probably drinking too much and often battled with hangovers.

But overall, it wasn’t a hardship: “At the time I thought it was good because you get to know your bosses really well. We used to talk about work a lot but also non-work stuff… [and] get to know the other person better.”

His generation came up in the workforce after Japan’s economic bubble burst in the early 1990s. An era of excess and extravagance ended as a period of prolonged economic pain – known as the country’s lost decade – began.

The idea of a “job for life” started to recede and other forces, such as more part-time staff and women in the workforce, saw the culture within traditional Japanese organisations shift.

Prof Nemoto says before the bubble burst, drinking was an extension of work. But as the business environment changed, so too did expectations on staff – including around socialising with the boss.

Mr Katsuki says now workplaces in Japan are just like anywhere else in the world, with pre-planned social events like welcome dinners.

He says the amount of alcohol drunk at work functions has fallen and fewer bosses will tap their staff on the shoulder for a night out. That’s due in part to fears around the perception of harassment.

Mr Katsuki’s experience mirrors the shifting workplace dynamics seen elsewhere in the world that have left some unsure of the new “rules” on the job.

He discusses this regularly with his team and has pushed to define the boundaries of what’s acceptable so as not to overstep the mark.

“People are unsure even whether they can say ‘you changed your hairstyle’ to a female employee. There’s a lot less conversation because people are afraid of saying something… and being told that’s harassment.”

Yet as managers attempt to navigate the new terrain, some younger workers are feeling left out. They think the perceived risks have prompted an overreaction.

Mr Kitamura, who now works as a project manager at market research firm CarterJMRN in Tokyo, says newcomers “feel like they aren’t being invited to drink anymore”.

“They feel excluded. Drinking is still a social tool… to really connect with your manager. They will talk to the manager and say, hey why aren’t you inviting me to the drinking party?”

He says while he felt pressure as a newcomer to go to work gatherings, he enjoys drinking and wants to be included.

Parissa Haghirian, professor of international management at Sophia University, echoes that sentiment – and underlines the importance in Japan of forming social bonds over dinner and drinks.

“People like drinking in Japan,” she says. “Drinking and smoking are seen as relaxing things. It doesn’t have such bad connotations.”

“The idea is we do this together, it’s extremely important to be part of it.”