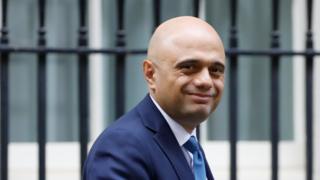 Setting a 4 September date for the 12-month spending round – earlier than previously planned – he said there would be no “blank cheque” for departments.

Mr Javid said he would stick to the current borrowing rules, limiting the scope for extensive spending increases.

The announcement of the date for the spending review came after the government cancelled what would have been been Mr Javid’s first major speech on Wednesday.

Ministerial sources said bringing the review forward was intended to provide certainty ahead of Brexit, which the government has promised will happen on 31 October.

But BBC political correspondent Nick Eardley said it also increases speculation that Prime Minister Boris Johnson is preparing the ground for a general election in the autumn – something that Downing Street denies.

Mr Johnson would require the support of two-thirds of MPs to call an early election – or one would follow a successful no-confidence vote in the government.

Paul Johnson, director of the Institute for Fiscal Studies (IFS), said Mr Javid should be able to stay within existing borrowing rules as long as growth continues.

“We’re well within that, assuming the economy continues to grow as expected, in a world in which we get a reasonable kind of Brexit,” he told BBC Radio 4’s Today programme.

He added that the chancellor would have to decide whether to spend money in areas that “sound most popular”, or in areas that have seen lower funding in recent years.

“The bits of public services that have really suffered much worse than those areas are the justice system, prisons and courts and so on, local government, social care and further education,” he added.

Mr Javid said the government could afford to spend more on its priorities after a decade of cuts.

Writing in the Daily Telegraph, he said: “Thanks to the hard work of the British people over the last decade, we can afford to spend more on the people’s priorities – without breaking the rules around what the government should spend – and we’ll do that in a few key areas like schools, hospitals and police.

“But at the same time, it’s vital that we continue to live within our means as a country.

“Unlike the Labour Party, we don’t believe in just throwing money at a problem. And especially at a time when the global economy is slowing, it’s important that we don’t let our public finances get out of control. “

He said the departments for which he was funding increases were “lifelines of opportunity”, saying that his teachers put him on the path to be chancellor.

Boris Johnson was elected by party members on the back of a list of spending intentions (and tax cuts). That list was sparse on detail, but some say the total cost could be more than £30bn.

However, Sajid Javid says there’ll be no blank cheque. Instead, this chancellor – who’ll have been in the post just six weeks next Wednesday – appears to be using his predecessor Philip Hammond’s playbook. That chancellor first told me in April that if a Brexit deal hadn’t been struck by the autumn, it’d be sensible to lay out plans for just one year, not the usual three, in case extra funds needed to be used to support the economy in the event of a no-deal.

His successor is not only doing that, but also sticking to the existing borrowing rules. That means Mr Javid can afford to borrow a bit more to spend. He has about £15bn of such “headroom” up to 2021 (down from an earlier £27bn, because of changes in the way student loans are accounted for).

Given the question marks over the path of Brexit, he probably won’t use it all. And it won’t be enough to cover the prime minister’s wishlist: areas such as defence and culture may not get much of a look in. But there’s still enough to spend and he will inevitably claim to be ending austerity – although there’s a way to go to reverse all the cuts in real terms of recent years.

Schools are expected to be in line for an extra £4bn of funding in next week’s spending review.

Mr Javid also paid tribute to police for keeping his family safe when the street he grew up on became a centre for drug dealers, and to the health service for caring for his father in his final days.

“These aren’t just numbers on a spreadsheet. They’re the beating heart of our country,” he said.

Labour’s shadow chancellor John McDonnell said: “Nobody is fooled into believing that this is a proper and normal spending review.

“As each spending announcement is dribbled out it is exposed as inadequate and whole areas of spending needs like local councils and addressing child poverty are ignored. This is not serious government.”

Spending reviews normally happen every two to four years, but due to Brexit delays the last one took place in 2015.

Mr Javid said he asked for a 12-month spending round instead of a longer-term review.

Setting out day-to-day departmental budgets for 2020-21 will “clear the ground ahead of Brexit while delivering on people’s priorities”, he said.

Mr Javid said: “The next 65 days will see a relentless focus across Whitehall on preparing to leave the EU.”