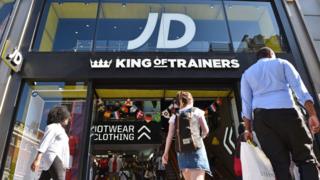 JD Sports has strongly criticised the UK’s competition watchdog after it warned that the retailer’s takeover of rival Footasylum could be blocked.

JD called the decision “flawed”, adding the Competition and Markets Authority (CMA) had “lost sight of its objective to protect consumer interests”.

The CMA said the £90m deal could mean shoppers “lose out”, with fewer discounts and less choice.

It said that blocking the deal might the only way to address these concerns.

However, JD Sports executive chairman Peter Cowgill said: “The CMA’s provisional decision is fundamentally flawed and demonstrates a complete misunderstanding of our market to an alarming extent, given its six-month review.

“The competitive landscape described by the CMA is one which neither I, nor any experienced sector analyst, would recognise.

“Just take a walk down any major UK High Street or search for Nike or Adidas trainers on Google and you can see for yourself how competitive this marketplace really is.”

JD Sports has about 400 stores and owns a number of other High Street brands such as Size?, Scotts, Tessuti and Footpetrol.

Footasylum is a smaller chain and has about 70 stores in the UK.

Kip Meek, chair of the independent inquiry group looking at the investigation, said the merger could “particularly affect younger customers and students, who shop in JD Sports and Footasylum”.

The CMA said it looked at surveys of more than 10,000 JD Sports and Footasylum customers, as well as documents from the companies and their competitors, during the investigation.

It also said shoppers spent more than £5bn on sports clothing and footwear in 2018, which is becoming increasingly popular with younger consumers.

The rise of online

Mr Lim said: “The sector is evolving at a fierce pace with competition arising for previously unimaginable channels.

“This will only continue to accelerate and businesses will need to embrace change and reinvent themselves to remain relevant, which is at the heart of the proposed merger.”

The CMA is now asking for views on its findings and suggestions on ways to address its concerns over competition.

It added that blocking the deal by forcing JD Sports to sell the Footasylum business might be the only way to do so.

The deadline for its final report on the merger has been extended to 11 May.