Jessops plans to call in administrators 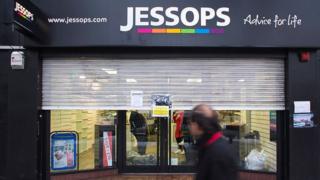 Peter Jones bought Jessops out of administration in 2013

Mr Jones bought the chain from administrators in 2013 after it collapsed under £81m of debt.

But since then, the firm has not made a single profit and losses have mounted in recent years.

Lease charges, which include rent on stores, increased from £4.4m in 2017.

Now Mr Jones is reportedly planning to seek a company voluntary agreement (CVA) with its landlords and lenders.

Sky News said the CVA was expected to lead to store closures and rent cuts.

But sources close to Jessops said Mr Jones still saw a future in the business and would not say how many of the chain’s 46 stores were at risk of closure.

The chain, which employs about 500 people, is the latest High Street brand to acknowledge tough trading conditions.