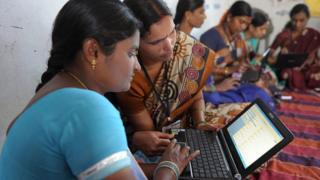 Jio Fiber will shake up the market, say experts

Telecom giant Reliance will charge subscribers $10 to $139 a month for speeds ranging from 100Mbps to 1Gbps.

The free services, coupled with relatively low-cost internet, are likely to spark a fierce price war.

Competitors and customers are braced for a repeat of 2016, when mobile network prices plunged after Reliance introduced free calls and data.

He added that subscribers would get incentives ranging from free outgoing calls on landlines to free LED TVs. He also said premium customers would be “able to watch movies in their living rooms the same day these movies are released”.

The array of offers means that with just one product, Reliance will take on competitors as diverse as telecom companies, streaming platforms and even cinema halls.

India is one of the world’s fastest-growing internet markets – and the appetite for video-on-demand is expected to keep rising. Television, streaming platforms and movies will account for some 46% of the growth in the Indian media industry, according to a recent report by the consultancy firm Price Waterhouse.

As with any new service from Reliance, Jio Fiber made headlines well before its launch on 5 September. Mukesh Ambani’s announcement in August shook up the sector, and had broadband operators running for cover and coming back with counter-offers. Its biggest competitor, Airtel, launched a digital entertainment services platform called Xstream ahead of Jio Fiber’s launch.

Mr Ambani announced plans, offers and features that were as irresistible as expected – and there was certain to be be a long-drawn out free trial offer.

Premium plans, he said, would include giveaways that are unprecedented in India: a high-definition or, better, LED television set, and a 4K (ultra-high definition) set-top box, which could also do group video calls.

Some 15 million people have already registered for the service. Reliance is aiming for 20 million residential users and 15 million businesses across 1,600 towns in India.

The Reliance Jio playbook is now well established: an aggressive launch and free trial offer that pulls in millions of customers and shakes up the market.

Jio launched mobile services in September 2016, and its free trial offer attracted 100 million customers in just six months. Its 340 million customers spend about 30% more than other operators’ customers. It also drove down mobile data prices sharply in India. There were 10 telecom operators when Jio launched: now there are just four.

India’s many broadband players are staring at a similar prospect – some of them – such as Airtel and BSNL- are large and present across the country, while others are smaller and confined to regional markets.

A major shake-up in the market – with smaller broadband players simply folding up (very few will be acquired) – is not a matter of if, but when.