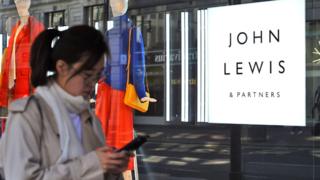 John Lewis is seeking discounts from its landlords to cut costs, in a highly unusual move that highlights the huge pressures on retailers.

The BBC has learned that the retail giant has been telling landlords in some locations that it will withhold 20% of this quarter’s service charge.

These are the fees retailers pay on top of rent for services such as heating and security.

John Lewis said the charges had become too high and urged landlords to help.

But the move could lead to legal action by property owners to recover any unpaid money.

John Lewis Partnership announced a major restructuring of its management teams earlier this week in a bid to cut £100m a year from its costs. From next year its supermarkets and department store divisions will be run as one business.

But it’s also clearly trying to making savings across its portfolio of stores as well.

“This was done without any consultation,” one landlord told the BBC.

“Every landlord will be looking at their lease, talking to lawyers who will get revved up to recover this money as a debt,” he added.

A service charge is a sum due under the terms of a lease between a landlord and tenant, towards the costs incurred in providing a range of services for the operation of a building’s common parts.

That could include cleaning, security, maintenance, marketing, heating/cooling and staffing. Tenants are then charged on an apportioned basis relating to the size of the space occupied with larger stores getting a significant weighted discount.

John Lewis has around 20 stores in covered shopping centres.

It’s understood that it wants mainly these landlords to shoulder some of the service charge during the so called “golden quarter” – the fourth quarter that includes Christmas. In September, the group posted its first ever loss for the first half of this year.

In a statement John Lewis said: “At a time when we are doing everything we can to reduce our cost base, we have unfortunately been faced with regular increases to the service charges we pay for some of our shops in shopping centres.

“Over the last three years we have seen an increase in service charges of 20% and these continued increases are simply not acceptable, particularly in the absence of strenuous efforts by landlords to work collaboratively with us to reduce these costs.

“We are investing more in our current shop estate than ever before to do everything we can to encourage customers to grow footfall to our shops and we hope that our landlords will support us in continuing to do this,” it added.

But John Lewis is under contract to meet its service charge obligations and withholding a big chunk of it could put it in direct conflict with some of its property owners.

“John Lewis is in a much better place than most of its rivals but its revenues are under enormous pressure right now,” said another landlord.

“What they’re up to, I think, is trying to open up a broader conversation about property costs more generally. The market is distorted right now. The stronger retailers are pretty concerned about this uneven playing field,” he added.

Debenhams has managed to slash its rent bill with reductions of up to 50% after securing a restructuring deal with its creditors. Struggling retailers have been turning to these so-called company voluntary arrangements as a way to cut costs.

House of Fraser was bought out of administration by Mike Ashley’s Sports Direct and many of these stores are currently paying little if any rent.

John Lewis is one of Britain’s stronger retail chains and has a reputation for plain dealing. This particular cost-cutting measure, if it succeeds, will be controversial for the already beleaguered retail property industry. The group’s biggest landlords include Hammerson and Intu.

“I am astounded to hear this from a company which sets the gold standard in retail,” one seasoned property expert told the BBC.

“There’s nothing new in retailers trying to challenge the specifics of a service charge. But to seek to withhold money like this is in breach of a contract. This is going to go down like a lead balloon.”

Landlords are already grappling with falling rents and property values. Now they may have something else to worry about if other retailers follow suit.