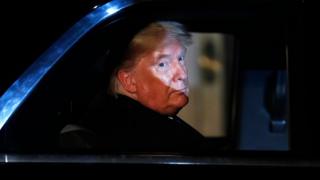 Prime Minister Boris Johnson has said he would press ahead with a digital sales tax even after the US threatened to punish France for a similar move.

In a proposal first outlined last year, large online companies face a tax of 2% of UK sales from April 2020.

Donald Trump has threatened to impose taxes on French goods in retaliation for a digital services tax that would affect Google, Amazon and Facebook.

Ahead of Wednesday’s Nato meeting in Watford, the US President said: “We’ve taxed wine and we have other taxes scheduled.

“We’d rather not do that, but that’s the way it would work. So it’s either going to work out, or we’ll work out some mutually beneficial tax.”

The US has made clear that other countries pursuing a digital sales tax could face similar action.

Multinational companies including Google and Facebook have been criticised for paying very little tax in some countries despite booking large revenues due to the way profits can be reported in lower tax jurisdictions.

A multilateral solution is being sought but some countries, including the UK, are introducing interim taxes.

“On the digital services tax, I do think we need to look at the operation of the big digital companies and the huge revenues they have in this country and the amount of tax that they pay,” Mr Johnson said late on Tuesday.

“We need to sort that out. They need to make a fairer contribution.”

The UK’s tax was first suggested by Philip Hammond, the former chancellor and could initially raise almost £500m a year.

The pledge to implement the tax is contained in the Conservative manifesto.

The Labour Party has also promised a tax on “multinationals”. In the party’s press release about the plans last month, “Amazon, Facebook and Google” were mentioned specifically.