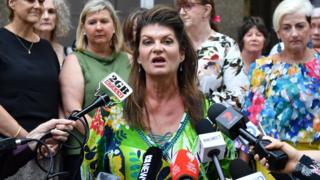 Julie Davis, the original claimant in the case, said women had been treated “like guinea pigs”.

Australia’s Federal Court found that J&J subsidiary Ethicon failed to warn patients and surgeons about the “risks” posed by the products.

The implants were commonly used to treat pelvic organ prolapse and incontinence after childbirth.

The case is one of a series of lawsuits J&J faces over the products.

Some patients said they had suffered chronic pain, bleeding and severe discomfort during sexual intercourse after having the mesh surgically implanted.

Judge Anna Katzmann ruled that much of the information the company provided about the products was “inaccurate” and at times made “false representations”.

“The risks were known, not insignificant and on Ethicon’s own admission, serious harm could ensue if they eventuated,” Ms Katzmann said in her ruling.

The court will set damages next year.

In a statement, Ethicon defended its record and said it would consider an appeal.

“Ethicon believes that the company acted ethically and responsibly in the research, development and supply of these products,” the company said.

Julie Davis, the original claimant in the case, welcomed the decision.

“They have treated women essentially like guinea pigs, lied about it and done nothing to help,” she told reporters outside the court in Sydney.

The ruling is the latest bad news for J&J, which is facing billions of dollars in legal claims over other products, including opioids.

In October, the company agreed to pay nearly $117m (£90.5m) to resolve claims over pelvic mesh in 41 US states and the District of Columbia.

It is also facing lawsuits over the product in Canada and Europe.

Separately, J&J is facing thousands of lawsuits from people who claim its talc products caused cancer.

The multinational was also ordered to pay $8bn in damages to a man over claims he was not warned that an anti-psychotic drug could lead to breast growth.

Despite the lawsuits, the company booked $20.7bn in quarterly sales in its most recent results, an increase of 1.9% over the same quarter in 2018.