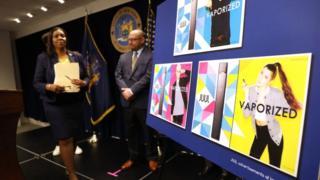 Juul Labs, the biggest vaping firm in the US, has been hit with a lawsuit by the state of New York.

Attorney General Letitia James accused the firm of misrepresenting the safety of its products and targeting teens in advertisements.

Her action follows similar actions by officials in California and North Carolina, as well as federal warnings.

Juul has overhauled its marketing over the last year. It says it does not intend to attract underage users.

A spokesman said the firm, which is partly owned by tobacco giant Altria, had not reviewed the New York complaint, but that it was cooperating with regulators in an effort to “earn the trust of society”.

“We remain focused on resetting the vapour category in the US,” Juul spokesman Austin Finan said in a statement. “Our customer base is the world’s 1 billion adult smokers and we do not intend to attract underage users.”

Health officials have linked vaping to more than 2,000 lung injuries in the US this year.

More than 27% of teenage school children used electronic cigarettes in the previous month, more than double the share a year ago, according to a survey by the Centers for Disease Control.

A majority of youth also cited Juul as their “usual brand”.

Ms James said the company “took a page from Big Tobacco’s playbook”, promoting its products with glossy advertisements and parties that did not disclose its addictive contents.

“By glamorizing vaping, while at the same time downplaying the nicotine found in vaping products, Juul is putting countless New Yorkers at risk,” she said.

Several states in the US have introduced limits on the sales of e-cigarettes.

President Donald Trump had also announced plans for a national ban on flavoured e-cigarettes in September, but he has reportedly reversed course because of possible job losses and voter pushback.

“Children’s health & safety, together with jobs, will be a focus!” he tweeted on 11 November.

In response to the pushback from regulators, Juul has announced a series of changes, including a new chief executive.

This month, the firm said it would only sell tobacco flavoured products, adding mint to the flavours that it stopped offering after complaints that they targeted younger customers.

Mint pods had accounted for 70% of its sales.