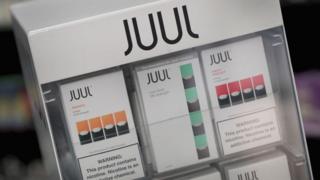 All flavoured e-cigarettes will be banned in Michigan

US regulators have sent a warning letter to Juul Labs, saying the e-cigarette company violated US law by promoting its products as safer than traditional cigarettes.

The firm must have sign-off from the Food and Drug Administration (FDA) to make such a claim.

Juul said it was reviewing the FDA concerns and will “fully cooperate”.

The company, which has long promoted its nicotine pods as a safer alternative to traditional cigarettes, must provide a written response to the FDA within 15 days.

“Juul has ignored the law, and very concerningly, has made some of these statements in school to our nation’s youth,” he said.

Michigan last week became the first state in the US to ban flavoured e-cigarettes.

The move came as the US Centers for Disease Control and Prevention (CDC) confirmed it was investigating five deaths in California, Illinois, Indiana, Minnesota and Oregon associated with use of vaping products.

In addition, the agency said it is examining more than 450 cases of lung illnesses.

Federal officials have been pushing Juul – the biggest player in the US e-cigarette market – to modify its marketing since last year, amid a startling increase in youth vaping.

The firm has responded by banning online sales to anyone under the age of 21, stopping its social media campaigns and suspending sales of its flavoured products in traditional stores, among other steps.

“We believe you have a continuing responsibility to take action to address the epidemic of youth use of your products, some of which appears to have been a direct result of your product design and marketing campaigns, whether or not some of these practices have been discontinued,” the FDA wrote.