KFC to trial plant-based nuggets and wings in US 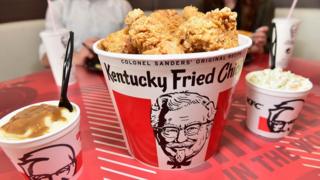 KFC is to trial meatless “chicken” nuggets made from plants as it tries to further take advantage of the growing popularity of meat substitutes.

It has teamed up with vegan food maker Beyond Meat to offer meatless nuggets and wings for the limited US trial run.

KFC is one of many fast-food chains experimenting with plant-based food.

Burger King announced a plant-based Whopper earlier this year, while Subway has also said it will test plant-based meatballs.

According to its press release, KFC’s Beyond Fried Chicken will be offered at one restaurant in Atlanta on 27 August and will still be “finger lickin’ good”, as its slogan promises.

The firm said it was the first US fast-food restaurant to introduce a plant-based chicken. It tested a vegan alternative to its chicken burger earlier this year in the UK.

KFC said it would be looking at customer feedback to decide whether to roll the option out across the US.

Beyond Meat shares rose more than 5% on the news. The vegan food maker saw a stellar market debut when it listed its shares on US stock market earlier this year.