Labour pledges to cut rail fares by a third

December 1, 2019 by Joshua Marshall No Comments 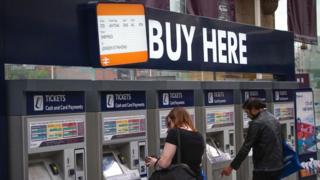 Labour has announced plans to slash rail fares by 33% and simplify ticket prices for part-time workers if it wins the election on 12 December.

The party also wants to make train travel free for young people under the age of 16 and build a central online booking portal with no booking fees.

The proposal is part of broader plans by the party to nationalise the UK’s train system.

The Conservatives and Liberal Democrats have also pledged to improve transport.

“Privatisation has created one of the most complex, exploitative and expensive ticketing systems in the world,” said Andy McDonald, Labour’s shadow transport secretary.

“Labour will scrap the bewildering and outdated fares and ticketing system that discriminates against part-time workers, discourages rail travel and excludes the young and low-paid.”

Labour says nationalisation – which it plans to achieve within five years of coming to power – will allow fares to be capped and improve the reliability of services.

The Conservatives’ Mr Shapps said: “This is another desperate attempt from Labour to distract from their inability and unwillingness to be straight with people on where they stand on Brexit, and the fact they would raise taxes on low and middle-income workers across the country.

“You simply cannot trust [Jeremy] Corbyn to deliver what he claims. His ideological plans would wreck our economy, cost people their livelihoods and with the help of Nicola Sturgeon, would waste the whole of next year on two more chaotic referendums.”

In keeping with their proposals to nationalise the railways, Labour’s plans to significantly cut fares would see a reverse in the direction of travel for policies on train fares since privatisation.

Since 1995, successive governments have tried to move the day-to-day cost of running the railways onto fare-payers and away from the taxpayer. At that time, it used to be split 50/50 – now it’s more like 75% on the shoulders of the passenger.

The argument goes that by raising fares in line with the Retail Prices Index inflation figure each year, government spending on the railways can be reserved for investment in infrastructure.

Announced just two days after the average train fare rise of 2.7% was published, and coinciding with major industrial action on several lines in the run-up to Christmas, Labour’s proposal for a significant cut to fares could prove popular with commuters.

The future of ticketing and rail fares is just one of the issues being looked at by a major review into the UK’s railways due to report after the election.

It is led by Keith Williams, the former boss of British Airways, who is particularly interested in how innovation in aviation fares and ticketing could be applied to the railways.

Meanwhile, the Liberal Democrats have pledged to freeze peak-time and season ticket train fares for the next five years and cancel the 2.7% rise in rail tickets from 2 January 2020. They also plan to complete the HS2 high-speed rail link.

And the Conservatives are pledging to improve transport links as part of a £3.6m Towns Fund.

They have also promised to give more funding to local combined authorities to improve bus and train services and put £500m into reversing cuts to the railway network made in the 1960s.

The Brexit Party’s flagship transport policy is scrapping the HS2 rail project – a goal it shares with the Green Party.