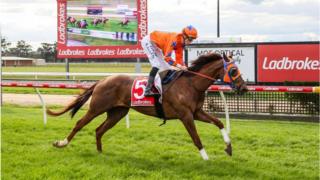 GVC, the company that owns Ladbrokes, says it expects its profits to be bigger than expected despite the government’s clampdown on gambling.

The firm still expects to close 900 stores over two years because of the maximum stake on fixed-odds betting terminals (FOBTs) being cut to £2.

But while the use of FOBTs has fallen, in the third quarter more bets were being placed in-store.

The group, which also owns Coral, said online betting is also up by 12%.

Kenneth Alexander, GVC’s chief executive, said: “I am delighted that the group’s financial performance has allowed us to upgrade our full-year earnings before interest and tax expectations again.

“Online momentum remains strong across all major territories, with net gaming revenue up 12% in the quarter despite the prior period containing part of the World Cup.”

In August, the company announced plans to shut 900 shops – putting up to 5,000 jobs at risk – because of the cut in FOBTs maximum stakes from £100.

There were 3,500 Ladbrokes and Coral shops at the start of the year, and some 198 have already shut, with the remainder scheduled for closure by April 2021.

Rival William Hill has said it will close 700 stores as a result of the regulatory clampdown. While GVC said revenue in the stores is down 18%, it still ahead of expectations.

GVC indicated that customers were finding other ways to gamble, as while revenues from machines – including FOBTs – were down 36% in the quarter, there was 7% rise in betting in shops.

But the biggest growth was in online gambling, boosted by a 16% rise in online sport betting revenues. GVC shares were up nearly 4% in early trading.