Leaked Zuckerberg audio: ‘You go to the mat and you fight’ 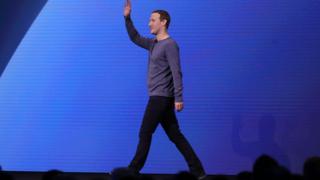 Mark Zuckerberg has said he would “go to the mat” to fight against Facebook’s break-up, in leaked audio published by tech news site The Verge.

US presidential hopeful Elizabeth Warren has said she would consider splitting up it and other tech giants.

Facebook’s founder also talked candidly about competing with rivals Twitter and TikTok, and the difficulties facing its crypto-currency Libra.

Mark Zuckerberg later confirmed on Facebook that the audio was genuine.

According to a transcript of the recording, Mr Zuckerberg admitted to being concerned about an attempt to break up the firm.

“I don’t want to have a major lawsuit against our own government… But look, at the end of the day, if someone’s going to try to threaten something that existential, you go to the mat and you fight,” he said in the recording.

“It doesn’t make election interference less likely. It makes it more likely because now the companies can’t co-ordinate and work together,” he added.

Mr Zuckerberg also discussed the reason why he declined to attend some political hearings around the world in the wake of the Cambridge Analytica data scandal. He repeatedly refused to attend meetings with politicians in the UK, sending other Facebook representatives in his place.

“It just doesn’t really make sense for me to go to hearings in every single country that wants to have me show up and, frankly, doesn’t have jurisdiction to demand that.”

With regard to Twitter, Mr Zuckerberg joked that Facebook’s investment on safety was “bigger than the whole revenue of their company”.

And on TikTok, he discussed Facebook’s rival product Lasso, a video-sharing platform which he said was “trying to get product-market fit in countries like Mexico… countries where TikTok is not already big”.

“The hope is to get that rolled out in a lot of places with existing currencies before the end of this year,” he said.

He also said the public part of the process had been “more dramatic” than private meetings with regulators.

And he acknowledged that getting Libra off the ground was going to be “a long road”.

There’s no bombshell revelation in this leak but we get some good insights into Mark Zuckerberg’s major preoccupations – regulation and new competitors.

In public, Facebook’s founder has been very measured about regulation, even saying he’d welcome it – in these conversations with his team he’s far more combative, prepared to “go to the mat” with Democratic presidential candidate Elizabeth Warren if she tries to break up his company.

And is he ever going to submit to demands to give evidence to UK parliamentarians? Not a chance.

As far as competition goes, he’s obviously wary about the rapid rise of TikTok – unlike with Instagram and WhatsApp, he’s not able to simply buy the Chinese-owned business so he’s working on a replica service.

Only the Paranoid Survive was the title of Intel founder Andy Grove’s memoir – and Mark Zuckerberg seems to have adopted it as his mantra now that move fast and break things has gone right out of fashion.