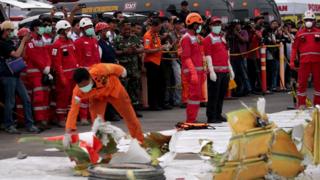 Mechanical and design problems with the flight control system were among the causes of last year’s Lion Air crash, families of the victims have been told.

Indonesian investigators focused on a system used to improve handling and prevent stalling on the Boeing 737 Max, which crashed killing 189 people.

The 737 Max model was grounded after an Ethiopian Airlines crash in March 2019.

On Tuesday, Boeing’s Kevin McAllister was ousted, the most senior executive to go in the wake of the crashes.

Boeing did not comment ahead of formal publication of the report into the Lion Air crash, which took place 13 minutes after take-off from Jakarta on 29 October.

The US company’s third-quarter results, due later on Wednesday, are expected to be dominated by the fall-out from the two fatal crashes and the financial impact from the continued grounding of the 737 Max

On Tuesday, Boeing said Mr McAllister, chief executive of Boeing Commercial Airplane, was leaving, becoming the most senior official to leave since the two crashes, which killed a total of 346 people.

Boeing’s chief executive, Dennis Muilenburg, was stripped of his title as chairman by the board this month and under pressure to explain what the company knew about issues with the 737 Max.

The final report by Indonesian investigators into the Lion Air crash is expected to be published on Friday, but an outline provided to families affected highlights issues with the MCAS (Manoeuvring Characteristics Augmentation System), which was designed to make the aircraft easier to fly.

According to reports, families have been told that there were incorrect assumptions about how the MCAS control system would behave and that the “deficiencies” had been highlighted during training.

Slides from the briefing to the families showed that there was a lack of documentation about how a “stick shaker” – warning pilots of a loss of lift – would work.

Reuters reported that a “stick shaker” was warning of a stall throughout the 13 minutes the plane was in air, with investigators believing this was based on erroneous data on its angle to the oncoming air.

“During the design and certification of the [737 Max], assumptions were made about pilot response to malfunctions which, even though consistent with current industry guidelines, turned out to be correct,” the report said, according to AFP.

The report found the system relied on a sole sensor for inputs and that replaced sensor had been “miscalibrated” during an earlier repair.

Questions about how much Boeing knew about problems with the 737 Max have been raised since Boeing provided documents to US lawmakers showing employees exchanged instant messages about issues with MACS as it was being certified in 2016.

A pilot wrote that he had run into unexpected trouble during tests, saying he “basically lied to the regulators [unknowingly]”.

The documents were provided ahead of Mr Muilenburg’s appearance before Congress next week.