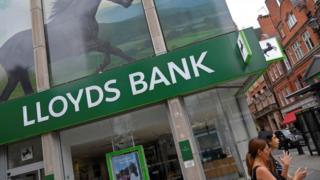 The City regulator has stressed that seven out of 10 bank customers will be better off or unchanged as another big bank announces its new overdraft rates.

Customers of Lloyds Banking Group will be charged “personalised” rates of up to 49.9% from April, but most will pay a rate of 39.9% to go into the red.

The latter is the same rate as planned by many of the major High Street banks.

The Financial Conduct Authority (FCA), which demanded changes from banks, said the new system was much simpler.

“Customers at some large banks were charged effective arranged overdraft rates in excess of 80% per year once fees and charges are factored in,” the FCA said.

“Our changes expose the true cost of an overdraft. We have eliminated high prices for unarranged overdrafts. This will result in a fairer distribution of charges, helping vulnerable consumers.”

The new rules, which come into force in April, require providers to charge a simple annual interest rate on all overdrafts and to get rid of fixed fees.

Most banks and building societies have chosen to set a rate very close to 40%.

Lloyds Banking Group, which includes the Halifax brand, is no different, with the majority of its customers paying a new annual rate of 39.9% – in effect paying £39.90 for each £100 borrowed in an overdraft for a whole year.

The banking giant will look at customers’ past financial behaviour when determining which rate to offer. Lloyds said risk-based pricing was standard practice for loans and credit cards and meant it could continue to offer overdrafts to a wider range of customers.

In 2017, Lloyds scrapped unarranged overdraft fees and returned item fees – a charge after a customer attempts to make a transaction when they do not have sufficient funds in their account.

Christopher Woodward, executive director of strategy and competition at the FCA, said overdrafts were not designed to be used for large amounts for long periods of time and consumers should consider other methods of credit if they find they needed to borrow for longer.