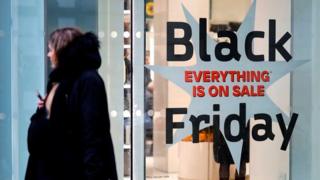 We are now starting the busiest time of year for loan sharks, as people feel under pressure to spend in the Black Friday sales, and on Christmas presents

She’d not borrowed a lot. And she’d more than paid it back. Six times over.

But when one mother looked up from her washing-up to see the man who’d lent her a few hundred pounds standing with her two teenage daughters, she was so frightened that she continued to pay back even more.

The harrowing tale is told by Cath Williams, who heads up government agency England Illegal Money Lending Team. Her team both gives support to people who have borrowed money from a loan shark, and prosecutes the illegal money lenders.

“That image was what he could do if he chose to,” she says. “It’s psychological warfare.”

But one of the most potent pieces of emotional blackmail is specific to this time of year – that desire to spend in the Black Friday sales, or the need to buy Christmas presents.

The pressures on people at this time of year are extraordinary, says Cath Williams

“The pressures at this time of year are extraordinary. You need your heating on, the car is more likely to break down in winter,” says Ms Williams. “Loan sharks will prey on that, extending loans, or giving extra time of repaying, or offering more money even if you don’t want it.”

In Bradford, the local Credit Union has joined forces with charity Artworks to create a day of distracting crafting – with the charming Yorkshire title: “Buy Nowt Day”.

About 300 people are expected through the doors, to do something fun and creative for free, like making decorations, gifts or cards – and crucially not spending a penny under pressure.

Mr Brewer insists he’s not anti-business, but likens the flash sale events to a sweet shop window, and wants people to think twice and spend wisely. “By doing this now, it’s not leaving any money available for later.”

Trying to point a finger of blame, or even stop the sales is fruitless. Black Friday has become crucial. A lot of shops make 25% of their annual sales in November and December – according to analysts IMRG.

But this year, the figures may not even add up for the retailers, with prices already slashed since summer to tempt consumers. IMRG expect sales and revenues to be near flat.

In Bradford, the local credit union is holding a “Buy Nowt Day”

So even though retailers may have mixed feeling about the event, the sales and deals are expected, even demanded, by consumers.

“When you’ve got things on offer, £20 or £30 off, people are not just buying one thing, but adding others things to that basket,” she says. “Then they can’t make their priority bills. So they’re borrowing just to be able to afford Christmas presents for the children.”

Nationally, across England, the Illegal Lending Team has seen a real shift in who is contacting them for support. “It’s not single mums on benefits. Last year we had over 50% of the people we helped in work,” explains Ms Williams. “We’ve got the highest number of homeowners we’ve ever seen.”

She and her team have organised victim support for thousands of Brits, many of whom have seen families break down, or been pushed close to suicide.

People are borrowing “just to be able to afford Christmas presents for the children”, says Allana Harrison

Often loan sharks can initially seem benign, such as coming with a friendly recommendation through a neighbour, at the school gates, or even in the workplace. Crucially there’s seldom paperwork, nor clarity on what must be repaid.

From Shakespeare to Dickens, the money-lenders are older than literature. And the most famous of them all, Ebenezer Scrooge, saw December as a fruitful time for business. But after a series of terrifying visits, even Scrooge changed his ways. Campaigners hope it won’t take that for families.