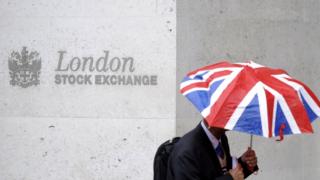 The company that owns Hong Kong’s main stock exchange has made a £32bn bid to buy its rival in London.

Shares in the London Stock Exchange Group jumped by more than 15% on news of the offer, but fell back later.

Hong Kong Exchanges and Clearing said in a statement that combining the two exchanges would bring together “the largest and most significant financial centres in Asia and Europe”.

But it wants the LSE to scrap its plans to buy data firm, Refinitiv.

“Together, we will connect East and West, be more diversified and we will be able to offer customers greater innovation, risk management and trading opportunities,” he added.

The LSE confirmed it had received an “unsolicited, preliminary and highly conditional” offer from its Hong Kong rival and said it would make an announcement in “due course”.

One of the conditions of the offer from Hong Kong is that the LSE scraps its proposed £22bn deal to buy data firm Refinitiv from its current owners, which include Thomson Reuters and private equity house Blackstone.

But in its statement, the LSE said it “remains committed to and continues to make good progress” with the deal.

In 2017, EU regulators blocked a proposed £21bn merger between the LSE and Germany’s Deutsche Boerse.

The European Commission said the deal would have created a “de facto monopoly” for certain financial services.