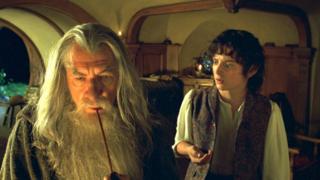 Ian McKellen and Elijah Wood in a scene from the film The Lord of the Rings: The Fellowship of the Ring

New Zealand is poised for another Middle-earth-tied economic boost after Amazon Studios picked the country as the location for its much-anticipated Lord of the Rings television series.

The show is widely tipped to be the most expensive ever made, at a cost of at least $1bn (£801m).

The Amazon unit wants to tap the huge success of the Lord of the Rings film trilogy, also shot in New Zealand.

The franchise delivered a boost to the country’s tourism and jobs.

Amazon Studios, which bought the rights to the television series two years ago, said the new adaptation will explore fresh storylines preceding J.R.R. Tolkien’s classic The Fellowship of the Ring.

In a statement on Tuesday, the firm said pre-production had started and shooting in Auckland would begin in the coming months.

“As we searched for the location in which we could bring to life the primordial beauty of the Second Age of Middle-earth, we knew we needed to find somewhere majestic, with pristine coasts, forests, and mountains,” the firm said.

Filmed in the early 2000s by Kiwi director Peter Jackson, the Lord of the Rings trilogy pulled in nearly $3bn at the box office and won a slew of Academy Awards.

Those films – along with The Hobbit trilogy – sparked a tourism boom in New Zealand.

They exposed the country’s lush landscapes to the world and prompted millions of visitors to flock to the locations used.

The country has also welcomed Middle-earth as part of its cultural identity and giant models of dragons and wizards decorate Wellington airport.