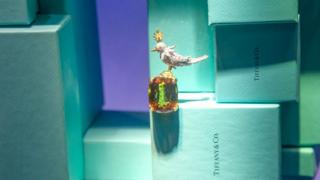 The deal gives LVMH’s billionaire owner Bernard Arnault a bigger slice of one of the fastest growing luxury sectors.

He said Tiffany had an “unparalleled heritage” and fitted with its other brands, Louis Vuitton and Bulgari.

Tiffany has suffered falling jewellery sales, hit by lower spending by tourists and a strong US dollar.

Tiffany is something of a New York institution and its flagship store is next to Trump Tower on 5th Avenue. The company hit global fame after being featured in the 1961 Audrey Hepburn film Breakfast at Tiffany’s.

Mr Arnault has coveted the business since buying the Bulgari brand in 2011 for $5.2bn. The Tiffany acquisition is LVMH’s biggest deal.

“We have an immense respect and admiration for Tiffany and intend to develop this jewel with the same dedication and commitment that we have applied to each and every one of our Maisons [brand houses],” he said.

LVMH has 75 brands, 156,000 employees and a network of more than 4,590 stores. Other brands include Kenzo, Tag Heuer, Dom Pérignon, Moet & Chandon, and Christian Dior.

“We will be proud to have Tiffany sit alongside our iconic brands and look forward to ensuring that Tiffany continues to thrive for centuries to come,” Mr Arnault said.

The deal values each Tiffany share at $135m in cash and is higher than the initial offer of $120 a share – which valued the business at $14.5bn.

Roger Farah, chairman of Tiffany, said the board had concluded this deal “provides an exciting path forward with a group that appreciates and will invest in Tiffany’s unique assets and strong human capital”.

Jewellery was one of the strongest performing areas of the luxury industry in 2018, according to consultancy Bain & Co, which forecast that comparable sales in the $20bn global market were set to grow 7% this year.

As part of its push for a bigger share of the US market, LVMH has opened a factory in south Texas, which was officially inaugurated last month in a ceremony attended by Mr Arnault and US President Donald Trump and his daughter Ivanka.