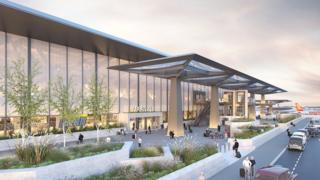 Plans to expand Luton Airport are “reckless and irresponsible” at a time when the UK should be reducing air travel, opponents have said.

A second consultation, which opens to the public today, includes plans for a third stop for the Luton DART train.

A spokesman said an additional £14m a year would be made available for “noise insulation schemes” for local communities, the airport would retain a single runway, and there were “no plans” to increase the number of night flights.

However, opponents said the plans “demonstrate commercial gain at any price”.

Andrew Lambourne, of Luton and District Association for the Control of Aircraft Noise, said the expansion was “unethical” with the owners “driven to maximise capacity for Luton regardless of the environmental impact”.

He said the promises made, including the introduction of quieter aircraft and the redesign of airspace in the region, were “not in the gift of the airport”.

“What constrains Luton is that the terminal is small and compact, they cannot get passengers through quick enough,” he said.

“But the main subtext here is climate change.

“This is yet another reckless and irresponsible drive to increase flights when we need to do the opposite.”

Ciaran Scanlon, programme delivery director at LLAL, said: “We recognise that our proposals would bring impacts, for the environment and people who live and work nearby.”

But he said the company was committed to encouraging greater use of public transport, with a target to “make sure at least 45 per cent of airport passengers do this from 2029.”

LLAL will submit its application to the Planning Inspectorate in summer 2020, with a decision expected by the Secretary of State by the end of 2021.

The public can view the plans over the next nine weeks, until 16 December.