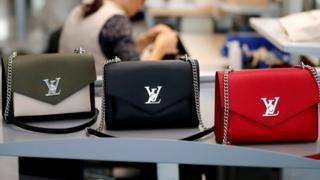 The Louis Vuitton brand is known for its signature handbags

The statement followed reports that LVMH had made a $14.5bn (£11.3bn) offer to buy the company.

“The LVMH Group confirms that it has held preliminary discussions regarding a possible transaction with Tiffany,” it said.

It produces a wide range of luxury goods including clothing, cosmetics, perfumes, drinks and fashion accessories, including its signature Louis Vuitton handbags.

It also owns brands such as Christian Dior, Givenchy and Kenzo, as well as many of the best-known champagne brands, including Dom Pérignon and Moët & Chandon.

Global demand for its products has held up well in recent years, but the same cannot be said for Tiffany, which has seen worldwide sales fall this year.

LVMH said there was “no assurance” that its talks with Tiffany would produce an agreement.