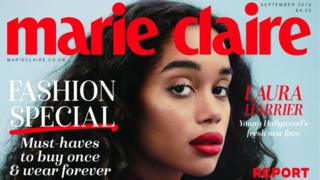 Marie Claire is to stop producing its UK print edition after November to become a digital-only offering.

TI Media, which publishes the fashion and beauty magazine, says it is making the change “to best serve the changing needs of its audience’s mobile-first, fast-paced, style-rich lifestyles”.

While print sales have fallen, the website has two million monthly users.

The magazine launched in 1988 and its digital-first edition will be published under licence with Groupe Marie Claire.

Jean de Boisdeffre, executive director of Marie Claire International, said: “We are thrilled to work with TI Media on this very important evolution of the Marie Claire brand. After more than 30 years of achievement in the UK, this new digital-first approach provides the launch pad for even more success in the coming decades.”

TI Media’s chief executive Marcus Rich said Marie Claire UK had led the conversation on the issues that really matter to women – such as women’s empowerment and and climate change – for more than three decades.

He added: “With full focus on our digital platforms, we will be future-proofing our ability to report on these vital and engaging subjects, alongside our top-ranking fashion and beauty offering and media-first brand extensions.”

According to the latest figures from media data analysts ABC, Marie Claire’s combined print and digital total from July to December 2018 was 120,133 per issue – almost a third of which were free copies and 4,729 of which were for the digital edition.

A Marie Claire spokeswoman told the BBC that Marie Claire operated in a challenging fashion and beauty sector and that “consumers and advertisers have accelerated their move to digital alternatives”.

She said: “This has had a significant impact on the level of print display advertising. Across the fashion and beauty sector, print display was down (25%) in 2018 and continues to decline at rates in excess of (30%) in 2019.

“A strategy focusing on Marie Claire UK’s digital business will give the brand the best opportunity to secure a profitable and sustainable future.”

Alexandra Shulman, who was the editor-in-chief of Vogue magazine for 25 years, told the BBC she was “very sad” to hear the news of Marie Claire’s closure.

She added: “When it launched it was a new magazine that had a unique selling point, which was to mix fashion and high fashion with good journalism and some sensational journalism.

“It was very, very lively and doing incredibly well, which it did for many years, but it has been struggling for probably the last decade really to find an original spot for itself. The print magazines that are doing all right are the magazines who have an originality.”

She said the future for magazines may be to possibly come out less frequently but “be something that people want to keep – more like a book than a disposable magazine”.

TI Media, formerly known as Time Inc, has more than 40 brands across print and digital in the UK, including Woman’s Weekly, Cycling Weekly, Horse & Hound and What’s On TV. Its publications reached 11.7 million UK adults in the year ending March 2019.

Marie Claire is not the first print magazine in the TI stable to close in recent times.

Music publication NME was closed in March 2018, after 66 years, after a move from a paid-for to a free magazine.

And earlier this year, TI shut down the print edition of celebrity gossip publication Now.