Mario Draghi: His legacy after eight tumultuous years at the ECB 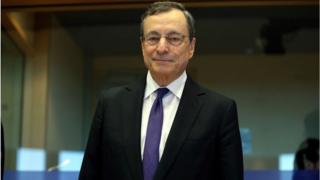 What is Mario Draghi’s legacy?

To be blunt, Mario Draghi doesn’t come across much like the hero in a video game.

But he is sometimes named after one – Super Mario, a plumber who is the central character in a Nintendo game.

The European Central Bank president has been given this rather incongruous nickname because of his role in steering the eurozone through some very difficult times. His fans, if that’s the right word, think he has saved the euro.

So now that Super-Mario is pulling the plug on his time at the ECB – his eight-year term is ending and Thursday sees the last ECB interest rate announcement under his tenure – how does his record look? And what kind of legacy will he leave his successor?

The eurozone financial crisis was already well underway when Mr Draghi took office as president of the ECB in November 2011.

At its most intense the crisis led many people to believe that the eurozone could break up. Greece came closest to having to give up the currency. The eurozone could perhaps have survived that.

But investors became worried about the debt situation of other eurozone economies, especially two of the largest – Italy and Spain. A default or exit from the eurozone by either of them would have been a larger, quite possible fatal challenge for the currency.

Greece came close to giving up the euro

The pressure in the markets was severe. Both countries’ governments saw their borrowing costs soar to unsustainable levels.

It reflected a fear among investors that they might leave the euro and repay their debts in a restored national currency that would lose value.

So Mario Draghi stepped in. It was perhaps the single most significant moment of his time at the ECB. In a speech – outside the eurozone in London – he told his audience and the financial world: “Within our mandate, the ECB is ready to do whatever it takes to preserve the euro. And believe me, it will be enough.”

Later, the ECB spelled out exactly what it was ready to do.

It was a programme that went by the name of outright monetary transactions (OMTs). It involved buying the bonds or debts of eurozone governments if their borrowing costs reflected fears of a eurozone breakup.

It seemed to work. Those high borrowing costs came down to more manageable levels.

And how much did the ECB spend buying the debts of financially stressed governments? Not a single euro. Just threatening to do it persuaded the markets.

When central banks buy or sell financial assets it’s called open market operations. What Mario Draghi did was an example of something that is sometimes known less formally as open mouth operations.

He has had other challenges in the shape of indifferent economic growth and inflation that has been persistently below the ECB’s target, which is that prices should rise at a rate that is below but close to 2%.

The ECB under Mr Draghi’s leadership has taken some dramatic steps to tackle the problem. There has been quantitative easing, buying financial assets, mainly government bonds, with newly created money.

Although this has some similarities to OMTs, there is a very important difference. It is not targeted on countries with borrowing cost problems. The ECB’s biggest holding of government bonds is Germany’s, a country which does not have that problem.

The ECB has also cut one of its interest rates to below zero. A few other central banks have done this, but the eurozone is the largest economy to have gone into the strange world of negative interest rates, where some borrowers in effect get paid to borrow.

Mario Draghi has been a key player in some of the highly technical innovation that central banks have undertaken in the aftermath of the international financial crisis a decade ago.

So what kind of legacy does he leave? The eurozone economy has been growing continuously since the second quarter of 2013.

But it hasn’t always been very robust and there are abundant warning signs now. The largest country in the region, Germany, might well be in recession. Inflation is persistently short of the ECB’s target.

Increasingly there is a view that monetary policy – that is interest rates and QE – can’t fix the problem. Mr Draghi, his successor Christine Lagarde, and many others have suggested that governments need to do more.

They argue that those countries that have room to spend more should do so to provide the eurozone economy with some stimulus.

And they tend to be reluctant to name the countries they think could and should do more, but it is no secret that Germany is the one they have mind most of all. The Netherlands and some others also have strong government finances.

Christine Lagarde, like Mario Draghi, has called on governments to spend more

There has also been some heavy criticism of Mr Draghi’s performance, especially from German commentators.

While he may regard the low and even negative interest policy as necessary to stimulate economic activity, critics see the approach as an attack on savers.

The German newspaper Bild recently called him Count Draghila and accused him of sucking German savings accounts empty. The article carried a picture of the ECB president with added vampire teeth.

There have also been challenges, unsuccessful so far, to the QE programme in the German courts. The complainants have argued that it constitutes central bank financing of government in a way that is banned by EU treaties.

This is often described as printing money, a term which raises the spectre of high inflation.

This touches a nerve in Germany, which has a particularly strong aversion to inflation, sometimes attributed to the hyperinflation the country experienced in the early 1920s.

In this case nothing like that has happened, as inflation has remained below the ECB’s target. The bank’s negative interest rate policy has also attracted criticism.

It is banks that are particularly affected. In essence they have to pay to deposit money with the ECB and the concern is that it makes it harder for them to be profitable.

Any economy needs banks to be commercially viable if they are to provide the credit that business and consumers need.

So it’s a rather mixed legacy that Mr Draghi will pass on. There are plenty of challenges, which could include a recession fairly soon, and the ECB is little firepower left to respond.

But it still is the eurozone and no countries have left it. When Mr Draghi took charge its future existence was not at all assured.