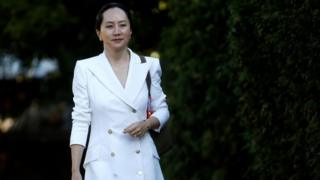 Meng Wanzhou on her way to court in Vancouver in September, as part of her fight against extradition to the US

A Chinese Huawei executive who was arrested in Canada a year ago has published an open letter detailing her life on bail and thanking supporters.

Meng Wanzhou – the chief financial officer and daughter of Huawei’s founder – is fighting extradition to the US on charges of violating sanctions against Iran.

In her widely read letter, she said she had time to “read a book” and “complete an oil painting” while on bail.

Her detention sparked a diplomatic row.

China has always said the charges against Ms Meng are politically motivated.

Shortly after her arrest, two Canadians were detained in China, but Beijing says the cases are not related to Ms Meng.

Michael Spavor, a consultant with links to North Korea, and Michael Kovrig, a former diplomat who works for an NGO, are accused of spying – although Canada has called their detention “arbitrary”.

They are being held in a detention centre and are allowed only infrequent visits from consular staff.

In April, it was reported they were being interrogated for between six to eight hours a day, and were sometimes subject to 24-hour artificial lighting.

What has Meng Wanzhou said?

Ms Weng’s letter was published on the Huawei website and on social media, on the anniversary of her detention.

In it, she thanked her supporters in Canada, saying the applause in the public gallery after the court granted her bail, 11 days into her detention, had “made her burst into tears”.

As part of the bail conditions, Ms Meng was given an electronic tag, and a 23:00-06:00 curfew, but was allowed to travel around much of Vancouver.

“When I was in Shenzhen [in China], time used to pass by very quickly,” Ms Meng wrote on Sunday night.

“I always felt like I was being stretched thin and that there was never enough time to get everything done.”

Now, she wrote, time passes so slowly “I have enough time to read a book from cover to cover. I can take the time to discuss minutiae with my colleagues or to carefully complete an oil painting”.

Ms Meng is fighting extradition to the US, where she is wanted for a host of charges, including evading sanctions on Iran – something she and Huawei deny. Her case is due to be heard in January.

She made no comment on the allegations in the letter.

BBC Monitoring said the version of the letter posted on Huawei’s social media channel had had more than 60 million views by Monday morning.

‘The princess of Chinese tech’

News of Meng Wanzhou’s arrest in 2018 broke just after China’s president Xi Jinping and Donald Trump sat down to dinner in Buenos Aires, Argentina at the G20 summit, to thrash out trade war issues.

The two leaders came to an understanding and a truce was signed – but thousands of miles away in Canada, a new battle was just beginning.

Ms Meng’s arrest was seen as a turning point in the US-China trade war; an illustration of how serious the Trump administration was about going after Huawei – particularly on issues like technology theft and violations of American law.

For China, Ms Meng’s arrest was seen as an attack like no other. If Huawei is the crown jewel of Chinese tech, then Ms Meng is its princess.

Although Beijing denies it, the detention of the two Canadians Mr Kovrig and Mr Spavor was widely seen as punishment for taking sides – and a warning to other countries who might consider copying Canada’s decision.

What is happening to Michael Spavor and Michael Kovrig?

The two Canadians were detained in December, shortly after Ms Weng was detained.

Their detention led to a diplomatic and trade row, with China blocking tens millions of dollars’ worth of Canadian pork and vegetable oil exports.

They were formally arrested in May, and can be held for up to 13-and-a-half-months before charges are filed, the Canadian government says.

“In particular, I expressed my concern and the concern of all Canadians regarding the conditions of their detention,” Francois-Philippe Champagne said.

But China has rejected accusations of arbitrary detention, saying the two Canadians had “engaged in suspected activities endangering national security”.

“These two cases they are very much different in nature,” he said. “For those two Canadian citizens there is no arbitrary arrest at all.”