Mental health at work: ‘My boss let me go over my condition’ 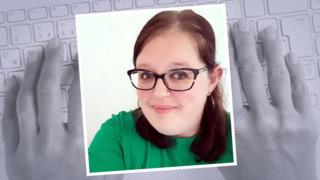 “I’ve had really bad experiences in the past with employers, I’ve even been ‘let go’ because I took time off for my mental health,” says Steph.

The 29-year-old says she worked at a number of retail and agency jobs, with most managers being far from understanding.

“I was always really anxious and uncomfortable asking for time off because of my mental health, to the point where I just went into work instead,” Steph says.

New research by Deloitte and the mental health charity Mind suggests that young people in the UK are more likely to use their holidays, instead of taking days off work, when experiencing poor mental health.

It was only when Steph started working at Greggs in 2017 that things started to change for the better, she says.

Steph says that when she opened up about suffering from anxiety and depression to her manager at the bakery chain, he was understanding.

“He went out of his way to make sure I was comfortable and felt safe.”

She added: “We talked at length about stuff that was bothering us. He really became like a father figure to me, and even pushed me to take time off when I was diagnosed with post-traumatic stress disorder.”

Steph says she had to stop working at the store because of a house move, but says she gained confidence from working with the team who were “like a family”.

“Never be afraid to express when you’re in a bad place. There are always people there to support you,” she says.

‘Major problem in the industry’

Bill Hill, on the other hand, is trying to make a change to how bosses deal with mental health in the construction industry.

He heads up the Lighthouse Club charity, which runs the Construction Industry Helpline, a national helpline which offers support to construction workers with mental health problems.

He says the industry is just “waking up to the issue”.

Between 2011 and 2015, more than 1,400 construction workers took their own lives, according to the Office for National Statistics.

The industry employs a high proportion of young men, who are statistically most at risk of dying by suicide.

But Bill says there is a range of reasons behind the “major problem” in the industry.

Isolation, job uncertainty from one week to the next and poor working conditions are just some of them.

“You are away from your family, often for days at a time at what can be a dangerous place to work. When men are put up with two or three other mates in a caravan, you often see a drinking culture too,” Bill says.

“Online gambling is also an issue. You expect to go home to a hero’s welcome, but by the time you get there you might have blown your wages.”

Bill now delivers talks on-site to managers to help them recognise the symptoms of poor mental health, and would like to see mental health first aiders on each construction site.

“It’s something that urgently needs addressing, for the future of the industry too,” Bill says.

He says that traditionally “masculine” construction sites can be tough places to work.

Women make up just 13% of the industry’s workforce, according to UK engineering giant Balfour Beatty.

“Not enough women are being attracted through to the industry yet, and if we address the gender balance, we might be able to make it a more positive environment.”

During the talks Bill delivers on mental health, he offers three “golden nuggets” of advice to managers:

Details of organisations which offer advice and support can also be found on the BBC’s Actionline.