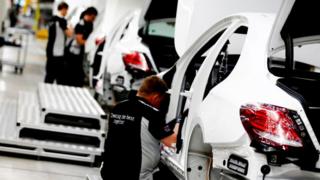 Luxury carmaker Mercedes-Benz is to cut jobs with the aim of making more than €1bn (£840m) in savings by the end of 2022, its owner Daimler has said.

The cuts – which reports say will lead to more than 1,000 jobs being lost – come as the carmaker faces challenges from new, tougher emissions targets.

It added that “the growing range of plug-in hybrids and all-electric cars is leading to cost increases”.

Daimler, which aims to make savings of more than €1.5bn across its group, did not say where the job cuts would fall. But they are expected to be in management and administrative roles.

“The cost burdens of meeting the [carbon dioxide] CO2 targets require comprehensive measures to increase efficiency in all areas of our company,” said Ola Källenius, chairman of the board of management of Daimler and Mercedes-Benz.

“This also includes the streamlining of our processes and structures.”

He added: “This will weigh on our results in 2020 and 2021. To be successful in the future, we must therefore act now and significantly increase our financial strength.”

It’s hardly surprising that Daimler is doing some urgent belt-tightening.

Profits have been poor lately, and costs have been high. There’s been the small matter of an €870m fine linked to the diesel emissions scandal, for example – not to mention the impact of an extended recall to deal with potentially faulty airbags.

At the same time, the company is bracing itself for the impact of strict new European emissions regulations, which will be phased in from next year. These will effectively force manufacturers to sell far more low or zero-emission cars than they do today – or face steep fines.

But developing electric cars is an expensive process, while selling them is not particularly profitable, at least not yet. So something has to give – and right now chief executive Ola Källenius clearly feels that Daimler needs more investment – and can afford a little bit less management.

All carmakers are facing the challenge of selling more low or zero-emission models in order to meet new European Union standards.

In addition to the cost cuts at Mercedes-Benz cars, Daimler said that the Mercedes-Benz Vans division would seek to cut personnel costs by €100m.

Daimler’s truck business is also planning to cut variable costs by €250m and personnel costs by €300m by the end of 2022.