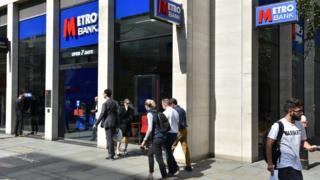 Metro Bank posted a loss for the first nine months of the year, following an accounting scandal and billions of pounds of customer withdrawals.

The lender recorded a £3.6m loss for the period, compared with a £25.1m profit a year ago.

It raised £375m from shareholders in May, after uncovering the accounting problem, where risk attached to some of its loans had been underestimated.

The bank has lost almost 90% of its value this year.

The bank – which has 70 branches in London and the South East – revealed in January it had underestimated the risk level of some of its commercial loans by almost £1bn.

After customers withdrew funds, the bank said on Wednesday, it had lured depositors back with better rates for fixed-term deposits, gaining £528m.