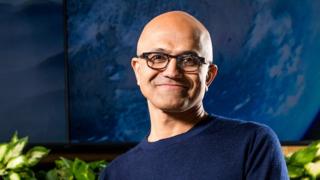 Microsoft has pledged to remove “all of the carbon” from the environment that it has emitted since the company was founded in 1975.

Chief executive Satya Nadella said he wanted to achieve the goal by 2050.

To do so, the company will become “carbon negative” by 2030, removing more carbon from the environment than it emits.

It one-ups its cloud-computing rival Amazon, which intends to go “carbon neutral” by 2040.

“When it comes to carbon, neutrality is not enough,” said Microsoft President Brad Smith.

The announcement was largely welcomed by environmentalists, who said it showed Microsoft was thinking about the bigger picture around climate change and not just its own role.

But Elizabeth Jardim, a senior campaigner with Greenpeace, warned that Microsoft still needed to address its ongoing relationship with oil and gas companies.

“While there is a lot to celebrate in Microsoft’s announcement, a gaping hole remains unaddressed: Microsoft’s expanding efforts to help fossil fuel companies drill more oil and gas with machine-learning and other AI technologies,” she said.

Microsoft’s plan is still more aggressive than those taken by other tech firms. It puts Microsoft 20 years ahead of its previous plan to become carbon neutral.

Microsoft said it planned to halve emissions created directly by the company and across its supply chain by 2039.

The company will still be creating carbon emissions, but the firm said it would invest in technology such as carbon capturing to offset the problem.

Microsoft said its data centres and other facilities would use 100% renewable energy by 2025.