Minimum wage: How high could the lowest salaries go? 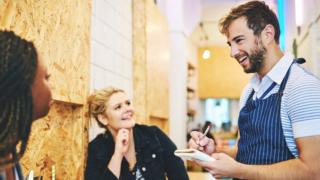 The National Living Wage will rise to £10.50 an hour by 2025, the government has said. So, how high could the lowest wages actually go?

What happens to the minimum wage already affects lots of low paid people – from bar staff to waiters and nursery nurses to sales assistants.

But the planned increases – announced by Chancellor Sajid Javid – mean the wage will increasingly affect many more.

When it reaches £10.50, it will be two-thirds of the median (middle) wage. It is likely to affect one in four employees and will be extended to all employees aged 21 and over by the mid 2020s.

But is there a limit to increasing the lowest wages and what are the benefits and risks of paying more?

How high is the minimum wage?

The UK already has one of the world’s highest minimum wages.

The National Living Wage is currently 59% of the hourly rate of £14 earned by those on the median (middle) wage. That is up from about 50% of the median as recently as 2010.

The government suggested that the planned increases would benefit four million employees.

Only five industrialised countries – France, Portugal, New Zealand, Israel and Korea – had a higher minimum hourly wage (as a proportion of average salaries) than the UK in 2018. The planned increases would probably take the UK to the top of the table.

Some wealthy countries have much lower minimum wages, including the US, Spain and Japan. Many others – including Italy and Sweden do not have a minimum wage at all.

Who benefits from a higher minimum wage?

The obvious reason for having a higher minimum wage is to boost the pay of those with low hourly pay.

In the UK, this often includes cleaners, hairdressers, carers and kitchen assistants, but as it rises will increasingly cover higher paid jobs too.

More than six out of 10 people currently on the minimum wage work part-time. A similar number are women, and almost nine out of 10 work in the private sector.

Boosting their wages may also help those on slightly more pay: employers often have to maintain different wages between different jobs.

However, while raising the minimum wage is often seen as a way to reduce poverty, it is not that simple.

Only one in five of those on the lowest wages lives in the UK’s poorest households.

This may be because many people on low incomes have a partner who earns more – raising their household income to a higher level.

And on its own, a higher minimum wage will not necessarily lift many people out of poverty. This is particularly true if they have a high cost of living, for example because of having children or high housing costs.

What are the risks of a higher minimum wage?

Given that minimum wages benefit low-paid workers, why not keep on raising them?

First, unless higher wages make workers more productive, they come at a cost.

That could mean increasing prices paid by consumers, cutting profits for companies, or cutting wages for other workers. It could also mean cutting back on other parts of workers’ pay, such as paid holidays, or pension contributions.

Second, there is a risk that higher minimum wages might lead employers to give fewer people jobs, or to cut hours.

But, so far, there is relatively little evidence that higher minimum wages have reduced overall employment levels, at least in the UK.

This might be because for many firms it is still profitable to hire these workers, despite paying higher salaries.

However, at some point, if raised high enough, firms would lose money by employing someone on a high minimum wage.

The trouble is that we do not know exactly how high these salaries can go before they lead to a reduction in the number of jobs available.

With few countries offering higher minimum wages than the UK, it is difficult to look for the answer overseas.

There is an extra risk in the government’s announcement: extending the higher minimum wage to younger workers aged 21 to 24.

Where studies have found negative effects of minimum wages on employment, they tend to be bigger for younger workers. And that is concerning, because youth unemployment can have long lasting consequences for people later in life too.

Therefore, watching what happens as the minimum wage rises – particularly among younger workers – will be essential to avoid any unwanted consequences.

This analysis piece was commissioned by the BBC from an expert working for an outside organisation.

Jonathan Cribb is a senior research economist at the Institute for Fiscal Studies, which describes itself as an independent research institute that aims to inform public debate on economics.

More details about its work can be found here and on Twitter.