More precious than gold: Why the metal palladium is soaring 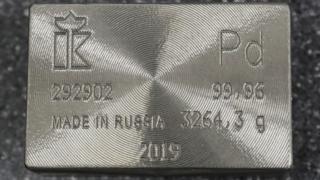 The price of the precious metal palladium has soared on the global commodities markets.

It has jumped by more than 25% in the last two weeks alone, and almost doubled in value over the last year.

At about $2,500 (£1,922) an ounce of palladium is more expensive than gold, and the pressures forcing its price up are unlikely to ease anytime soon.

But what is palladium, what is it used for, and why is its price rising?

It is a shiny white metal in the same group as platinum, along with ruthenium, rhodium, osmium, and iridium.

The majority of the world’s palladium comes from Russia and South Africa. Most of it is extracted as a byproduct in the mining of other metals, usually platinum and nickel.

What is it used for?

Its key commercial use is as a critical component in catalytic converters – a part of a car’s exhaust system that controls emissions – found mainly in petrol and hybrid vehicles.

The vast majority of palladium, more than 80%, is used in these devices that turn toxic gases, such as carbon monoxide, and nitrogen dioxide, into less harmful nitrogen, carbon dioxide, and water vapour.

It is also used, to a far lesser extent, in electronics, dentistry, and jewellery.

The metal’s soaring value in recent years has seen a jump in the theft of catalytic converters around the world.

London’s Metropolitan police said the number of thefts in the first six months of 2019 were more than 70% higher than the whole of the previous year.

Why is its price rising?

In short, it is because demand for palladium outstrips supply, and it has done for some time.

The amount of the metal produced in 2019 is forecast to be below global demand for the eighth year in a row.

As a secondary product of platinum and nickel extraction, miners have less flexibility to increase palladium output in response to rising prices.

And that shortfall looks set to continue, with South Africa, which produces around 40% of the world’s supply, last week saying its output of platinum group metals, including palladium, fell by 13.5% in November compared to a year earlier.

Meanwhile, demand for palladium from car makers has increased sharply for a number of reasons.

Around the world governments, notably China, are tightening regulations as they attempt to tackle air pollution from petrol vehicles.

At the same time the diesel emissions scandal in Europe has also had an impact. Consumers there have been shifting away from diesel cars, which mostly use platinum in their catalytic converters, and are instead buying petrol-driven vehicles, which use palladium.

The US-China trade deal, which was signed earlier this month, has also boosted prices. Traders expect the agreement to help ease downward pressure on global economic growth and slow the decline in Chinese car sales.