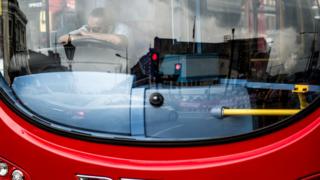 More than 3,000 local bus routes have been lost or reduced over the past decade, according to a new study.

The group said the service cuts had led to “poverty and social exclusion”.

In a statement, the Department for Transport said it supports local bus services with a £250m annual grant to keep fares lower.

But the Campaign for Better Transport said it had identified “a picture of incoherent and shrinking funding, resulting in degraded or lost services and increasing fares”.

The group said national government spending on bus services had fallen by £234m, in real terms, over the last decade.

“It leads to isolation and social exclusion and hinders access to employment, education and training as people find it more difficult and costly to travel.”

Almost 60% of journeys on public transport in Britain are made on buses, which take 4.8 billion fares each year with almost half of those in London, according to the study.

But the Campaign for Better Transport warns that number is in long-term decline.

It said passenger numbers have fallen by 6.6% over the last decade.

David Eldridge is 73 and his village of Berinsfield in Oxfordshire has been a victim of the cuts.

The T2, which used to drive through the village every hour would drop elderly passengers in Cowley, where they liked to do their shopping, he said.

He described the service as a “lifeline” for the village but it was cut in 2016.

Now, passengers for Cowley face a long walk out of the village and have to get on two buses, he said.

But bus users in Derbyshire and Northamptonshire have suffered most over the last year.

The Campaign for Better Transport said that of the 96 routes that have been scrapped nearly half were in the two counties.

The Department for Transport said: “Buses are vital for connecting people, homes and businesses, which is why we support local bus services with a £250m annual grant to help operators keep their fares lower and service levels higher.”

“We recently announced an additional £220m to deliver a bus revolution to boost services and make journeys greener, easier and more reliable.”

But the Campaign for Better Transport has called for a “ring-fenced, long-term fund” to rejuvenate Britain’s bus network and support discounted fares for concessions like students and elderly people.