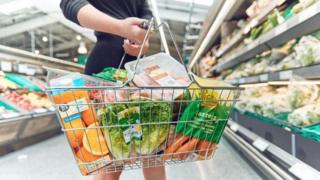 The UK’s fourth largest supermarket group, Morrisons, has said its sales fell over the Christmas period amid “challenging” trading conditions.

The retailer reported a 1.7% fall in like-for-like sales – which strip out the impact of new stores – excluding fuel, for the 22 weeks to 5 January.

It said the “customer uncertainty of the last year was sustained”.

Morrisons is the first of the big four chains to report Christmas sales, with Sainsbury’s and Tesco due this week.

On Monday, discount chain Aldi said that its total UK sales in the four weeks to 24 December rose 7.9% from a year before, although it did not give a like-for-like comparison.

There were rises in sales of fresh turkey, soft drinks and confectionery, but decreases in fresh beef and fruit and vegetables.

Reflecting on the Morrisons figures, the company’s chief executive, David Potts, said: “It was encouraging that during an unusually challenging period for sales, our execution was strong and our profitability robust, demonstrating the broad-based progress we have made during the turnaround.

“As always, we will take some learnings into the new year and look forward to 2020 with a strong plan and solid foundations on which to continue to grow.”

Morrisons said its key Christmas items were “once again very competitive”, with most prices the same as or lower than in 2018.

It added that during the trading period, four new stores were opened and four underperforming ones were closed, while it launched another 25 of its Fresh Look shops.

Richard Lim, chief executive of Retail Economics, said the results suggested that Morrisons was “outmanoeuvred” by its competitors.

“Shrinking sales demonstrate the fiercely competitive food sector,” he added. “Shoppers remained fixated on searching for the best value and highly price-sensitive against the backdrop of ongoing uncertainty.

“Despite the pressure on margins, the industry remained stuck in a spiral of continual discounting with the depth and breadth of promotions snowballing in the run-up to Christmas. Nevertheless, a firm grip on costs offset some of the decline in sales to deliver profitability in line with previous expectations.”