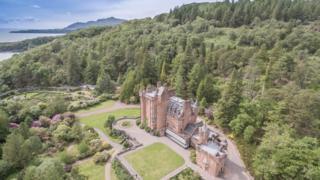 The 16-bedroom Glenborrodale Castle is on the list of five

More than a quarter of those clicking on property websites have no intention to buy. No wonder they end up looking the most striking homes on the market.

A castle, a multi-million pound penthouse, and an audacious mirrored bedroom ceiling are among the most-viewed, according to Rightmove.

The properties include a boathouse, private cinemas, and a replica Angel of the North – in Essex.

In contrast, the UK housing market has been relatively undramatic this year.

Relatively few homes have been put up for sale owing to political uncertainty and worries about the economy.

It might not be to everyone’s taste but the master bedroom in one mansion in Chigwell, Essex, features a huge mirror above the bed. It also has a replica, but smaller, Angel of the North sculpture outside.

“Suffice to say the properties with the biggest personalities or quirkiest features are usually the most popular,” said Miles Shipside, of Rightmove.

A survey of 6,000 people by rival property portal, Zoopla, earlier this year suggested that 27% of people clicking on its site had no intention to buy or sell. Fewer were actively looking for a specific property to buy than those browsing in general with an ambition to move or buy a first home.

It also suggested that 31% of those asked knew the exact house or street they wanted to live in next. This increases to 48% in London.

So, many of them may end up viewing and sharing top-end listings. They often feature cinema rooms, swimming pools, and those with a rich history.

The asking prices of Zoopla’s five most-viewed properties are no less than £3.5m each.

Seeing such homes on the site may be a source of frustration for regular sellers, trying to gain the attention of buyers – particularly during the winter.

Yet, there are ways in which they can make their home more attractive, according to property buyer Good Move.

Its tips for viewings include fixing the nagging DIY jobs, taking it easy on strong-smelling scents, ensuring it is warm, doing what you can to keep rooms well-lit, keeping the garden tidy, and putting pets out of the way during potential buyers’ visits.

“Winter can be a really difficult time to make a sale, with the gloomy weather, people’s reluctance to move house during the colder, shorter days, and even buyers and estate agents taking time off for Christmas,” said Ross Counsel, director at Good Move.