Mothercare staff: ‘We’re devastated, it was our family’ 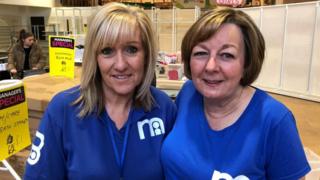 Karen and Sue have known each other since they were nine years old, and will work their final shifts at Mothercare’s Romford store this weekend.

All of the baby goods retailer’s 79 UK shops will be shut by Sunday, with thousands of jobs lost across the country after the firm called in administrators last November.

Like many struggling retailers, Mothercare found itself squeezed by the big UK supermarkets, fast fashion brands and the internet.

Having worked part-time at the Romford shop for 19 and 27 years respectively, Karen and Sue have seen customer numbers decreasing.

On Friday, customers queued outside before the doors of the Romford store opened.

They made their way around heavily-discounted goods from clothes, carry cots and high chairs to office equipment such as staplers, hole punches and even the store’s shelving units.

Karen decided to avoid working the final day in the shop on Saturday.

“It’s just too much,” says Sue, wearing a specially-made T-shirt by the Romford staff. On the back, it reads: “We are family”.

For now, the staff try to keep their spirits up, playing Coldplay over the loudspeakers and lighting up sectioned-off, empty parts of the store with disco lights.

Mothercare workers won’t be the only ones affected by store closures in early 2020, as tough trading conditions for retailers continue.

Fifteen Links of London shops will also close their doors by Sunday, affecting up to 350 jobs.

Department store chain Debenhams will have closed 22 of its shops by the end of January, resulting in 660 jobs being lost.

A further 28 Debenhams stores are due to close within the next five years, as the ailing chain tries to secure its future.

It comes as part of a rescue plan introduced after its previous owners had saddled it with a huge amount of debt, while it was tied into long leases for its large properties.

The number of job losses in retail overall is also increasing.

Figures from the Centre for Retail Research suggest that a total of 143,128 job losses in the sector were announced in 2019. That’s an increase of more than 25,000 from the previous year.

Previous research by the British Retail Consortium also warned that there would be up to 900,000 fewer jobs in retail over the next decade.

How many shops have shut?

Hardly a week goes by without an announcement about a fresh wave of store closures.

A net 1,234 stores shut on Britain’s top 500 High Streets in the first half of 2019, according to research by PwC and the Local Data Company.

That is up from 1,123 in the same period the previous year and the highest since the survey began in 2010.

The data looks at retail chains with more than five outlets.

Fashion stores saw the largest number of closures. Womenswear retailers were among those to have fallen on hard times in 2019, including chains such as Bonmarché which has entered administration and is to close 30 stores.

As firms issue updates after the crucial Christmas trading period, further closures could be announced.

What’s behind the wave of store closures?

In the last few years, things have become a lot harder for traditional retailers.

Companies have had to deal with rising costs such as increasing wages, rents and business rates. Research by Retail Economics suggests that operating costs have been increasing at a faster rate than sales for many shops.

Richard Lim, its chief executive, said: “Because the National Living Wage has risen at such pace, retailers are focusing on whether or not they can reduce labour costs by using things like automated checkouts.

He added: “That leaves fewer workers in retail, but those that are, are paid better wages.”

At the same time, retailers are trying to adapt to changing shopping habits. One in every £5 is now spent online.

“At the heart of it, those that are doing well are the ones that have a distinct proposition”, says Mr Lim, citing Primark and supermarkets Aldi and Lidl as firms that are thriving.

While the future might see further shops closing down, for some workers it’s hard to think much further ahead.

“I’m not rushing to find another job, because I can’t imagine working with another group of people like this,” says Karen.

“On Monday morning, that’s when the reality will hit.”