M&S profits drop after weak demand for its clothes 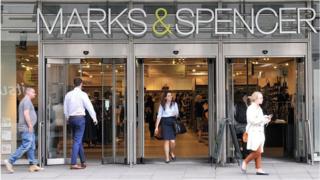 Marks and Spencer profits dropped in the first half of its financial year following a sharp fall in demand for its clothes and home goods.

The High Street retailer said that while its food business was “outperforming the market”, there had been issues in clothing and home.

He said after a “challenging” first half, it is now seeing improvements.

Like-for-like sales in clothing and home fell by 5.5% during the six months to 30 September, worse than an expected 4.3% drop.

M&S said there had been “availability challenges” as a result of “supply chain issues and a shape of buy that remained too broad”.

Mr Rowe said the firm was now starting to see the benefits of its transformation plan. “For the first time we are beginning to see the potential from the far reaching changes we are making,” he said.

However, while it forecast some improvement in trading in the second half of the year, market conditions remain challenging.

In September, M&S was relegated from the FTSE 100 index of Britain’s biggest listed companies.

It marked the first time the retailer had not been a FTSE 100 member since the index was launched in 1984.