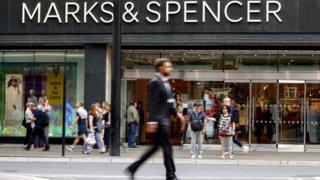 M&S said it overestimated demand for tight-fitting men’s clothing in the run-up to Christmas.

As a result, the High Street retailer said it had ordered more “regular” and “relaxed-fit” clothing for spring.

M&S boss, Steve Rowe, said “disappointing” issues, such as the surplus of skinny menswear, held the firm back from a stronger performance over Christmas.

Weak sales in clothing and homeware were offset by higher food sales.

However Mr Rowe said M&S did have issues with the “waste and supply chain” in its food department over Christmas.

The retailer said it ordered too much food in the final two weeks before the big day.

Nevertheless, like-for-like food sales, which exclude takings from new stores, increased by 1.4% in the final 13 weeks of 2019.

However, that growth was largely offset by a dip in the home and clothing departments at M&S.

The firm said customers were also more conservative when giving presents over Christmas.

M&S said fewer customers bought items from its gift range, which includes things that could be considered token presents, such as fragrance sets.

As a result, like-for-like sales at M&S climbed just 0.2% in the final months of the year.

“Disappointing one-off issues – notably waste and supply chain in the food business, the shape of buy in menswear and performance in our gifting categories – held us back from delivering a stronger result,” said Mr Rowe.

However, the firm outperformed rivals Tesco and Sainsbury’s, both of which saw sales slip during a similar period.

Richard Lim, the boss of analyst firm Retail Economics, said M&S could be showing signs of recovery after what was a tough year for the business, which dropped out of the FTSE 100 in September.

“While clothing and home lagged overall growth, it still improved on previous performances.”

But investors were disappointed by the result.

Shares in the M&S fell by as much as 11.2% after it revealed its results on Thursday.