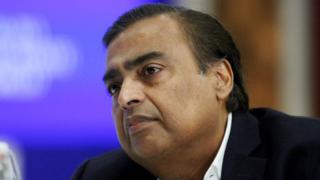 The main competitors to Mukesh Ambani’s Reliance Jio have been told they must pay the bulk of almost $13bn (£10bn) to the government in historical fees.

The country’s top court rejected calls from older firms, including Vodafone Idea, to review the case.

The court ruling adds yet more financial pressure on India’s telecoms sector, which has already been hit hard by a bitter price war.

After three years of price cutting, led by Mr Ambani, his company now has only two major competitors – Bharti Airtel and Vodafone Idea.

Vodafone Idea has been told it must pay about $3.9bn, while the ruling means Bharti Airtel is liable for $3bn. The charges relate to licence and spectrum fees that have accumulated over many years.

Vodafone has previously said the situation was “critical”, while Bharti Airtel said an earlier court order cast doubt on “its ability to continue as a going concern”.

She told the BBC: “Airtel, I think, would be under pressure, but would be able to manage. The cause of concern will be Vodafone (Idea).

“Probably Vodafone will be the most affected and we will end up with a duopoly of Airtel and Jio, which is not very good for the industry.”

Its entry into India’s telecom sector triggered a major shake-up in the sector which saw most of its competitors shut down or merge.