‘My court record only emerged when I got a job’ 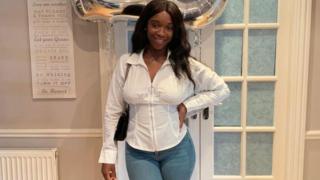 Receiving a county court judgement (CCJ) can have damaging consequences. So, not even knowing there is a ruling against you can come as a shock.

Claudia Bediako only discovered the CCJ against her when she got her first job. “If it hadn’t been for my job I would never have known,” says the 23-year-old, who lives in Cardiff.

The number of people in their 20s with court orders for unpaid debt has risen sharply in the last year, according to figures seen by Radio 4’s Money Box.

Court records from the Registry Trust show that last year 160,000 were given CCJs, up 30% from the year before.

Ms Bediako’s CCJ was for £270, for two weeks’ outstanding rent when she was in student accommodation at university.

“I [had] moved out from my family home into a different home, so I never received any correspondence from the court,” she said.

“I didn’t understand the severity until I got my latest job, at a bank. I was told ‘it needs to come off [be paid off]’ or else I could lose my job,” she said.

Ms Bediako disputes the claim against her

Ms Bediako disputes the £270 her ex-landlord says she owes him, and said she had faced problems applying for credit because of her CCJ.

What is a CCJ?

A CCJ is a court order in England, Wales and Northern Ireland that can be issued to an individual if they fail to repay money they owe.

It’s an action creditors can take as part of the debt collection process. If the debt is not paid, the CCJ can be filed on an individual’s credit report and remain on it for six years.

That can lead to problems getting things like a mortgage, credit card, a lease on a rental property and a mobile phone contract.

The file can be removed from a credit report if the debt is paid within one month of receiving the judgement. If it’s settled later, it remains on an individual’s credit report with a note marking that it’s been paid.

In Scotland, county court judgements are called decrees. Like CCJs, they can remain on a credit file for six years.

The Registry Trust, a not-for-profit group which manages court records on behalf of the Ministry of Justice, said the rise in CCJs for low amounts can be explained by banks and phone companies selling off smaller debts to specialist debt collection agencies.

“We’ve seen a massive rise in the number of judgements but a fall in the average value of judgements, which means that more and more creditors are using the courts to recover smaller debts,” said Mick McAteer, chairman of the Registry Trust.

He said that for some people, they only find out there is a CCJ on their credit record when they apply for a loan.

“Younger people tend to move house more often than their older counterparts, so they might miss letters about CCJs,” he said. “However, the purpose of a CCJ is to get someone to pay the money they owe.”

Sir Bob Neill, chairman of the House of Commons Justice Committee, said the rise is “very troubling and it’s part of an underlying problem of a lack of financial education that we have”.

He added that the next stage after a CCJ is when bailiffs are used to enforce a payment. But by then, he added, “a lot of the harm of the CCJ has already been done to people’s credit rating”.

The Ministry of Justice, which is responsible for the Courts and Tribunals service which issues CCJs, said it “doesn’t routinely comment on rises in statistics”.