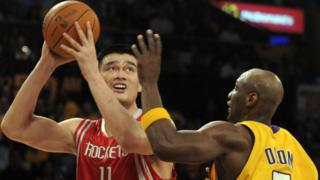 The US National Basketball Association has suffered “substantial” losses after an online comment from a team executive prompted a crisis in its relations with China, the NBA’s head has said.

“The financial consequences have been, and may continue to be, fairly dramatic,” Adam Silver said.

As a result Chinese firms suspended sponsorship and telecast deals.

The state-run broadcaster CCTV and Tencent Holdings, which streams NBA games in China, said they would stop broadcasting Rockets’ matches.

The Chinese Basketball Association suspended co-operation with the Houston Rockets, as did Chinese sportswear brand Li-Ning, and the club’s sponsor in China, Shanghai Pudong Development Bank.

Mr Silver said: “The losses have already been substantial.

“Our games are not back on the air in China as we speak, and we’ll see what happens next,” he told Time magazine’s Time 100 Health Summit in New York.

The NBA is hugely popular in China with around 800 million fans supporting millions of dollars of business.

Basketball is the most popular sport in China with 300 million people playing the game. according to the NBA.

The NBA has had a presence in China since 1992 when it opened its first office in Hong Kong.

The Houston Rockets are widely followed in China after it signed Chinese player and eight-time NBA All-Star Yao Ming in 2002.

NBA China, which conducts the league’s business in the country, was launched in 2008 and is now worth more than $4bn, according to Forbes.

Mr Morey’s tweet captioned “Fight For Freedom. Stand With Hong Kong”, prompted a furious backlash in China and Mr Silver said the Chinese government had called for Mr Morey to be sacked. But Mr Silver has defended his right to express his opinion.

“We were being asked to fire him by the Chinese government, by the parties we dealt with, government and business,” Silver said. “We said there’s no chance that’s happening. There’s no chance we’ll even discipline him.”

“The values of the NBA – the American values, we are an American business – travel with us wherever we go. And one of those values is free expression.”

Mr Silver said he understood the point of view that the NBA should withdraw from all activities in China, due to authoritarian nature of the regime but said the NBA felt that “constructive engagement, especially in sports, is very positive”.