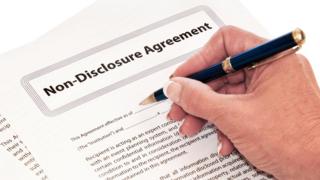 Non-disclosure agreements (NDAs) should not be used to prevent someone from reporting sexual harassment in the workplace, according to new guidance.

Arbitration service Acas has published advice for firms and workers about NDAs, including how to avoid misuse.

Acas said misusing these agreements can be “very damaging” to an organisation.

NDAs are contracts or parts of contracts that typically prevent staff and ex-staff making information public.

They can apply to commercially sensitive details such as inventions and ideas, or anything likely to damage an organisation’s reputation, and are sometimes known as “gagging orders” or “hush agreements”.

Acas chief executive Susan Clews, said: “The news has reported on victims coming forward that have alleged appalling abuse by high-profile figures who have then tried to use NDAs to silence whistleblowers.

“NDAs can be used legitimately in some situations but they should not be used routinely or to prevent someone from reporting sexual harassment, discrimination or whistleblowing at work.”

It emerged that NDAs were used by ex-movie mogul Harvey Weinstein and his company to settle allegations of sexual misconduct.

He was fired by The Weinstein Company before it eventually went bust.

As part of the bankruptcy filing, the company said it released anyone “who suffered or witnessed any form of sexual misconduct by Harvey Weinstein” from their NDAs.

Mr Weinstein denies that he ever engaged in “nonconsensual sex”.

It also states that employees should be given a reasonable length of time to consider signing a non-disclosure agreement including allowing them to consult a trade union or lawyer.

Additionally, Acas advises that NDAs should “never” be used routinely, stating they “should not be used to hide a problem or brush it under the carpet”.

Ms Clews said: “Our new advice can help employers and their staff understand what NDAs are, how to prevent their misuse and examples where they will not be needed.”