September 14, 2019 by Joshua Marshall No Comments 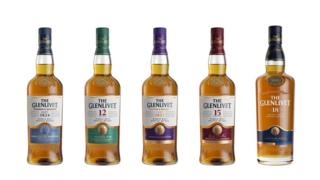 Whisky distiller Chivas Brothers has opened a new Scottish headquarters in Glasgow as part of a £500m investment.

The French-owned company is extending its bottling plant in Dumbarton, ahead of closing one in Paisley.

The new plant is designed for a million bottles per day, and is on track to be in operation next spring.

As part of Pernod Ricard, Chivas Brothers recently reported strong Scotch whisky sales growth of 7% in the year to June.

It reported a similar growth in the portfolio of the parent company’s other spirit drinks, including Beefeater gin, Jameson’s Irish whiskey, Absolut vodka, Martell cognac and, of course, Pernod.

Exports of Scotch were up nearly 8% by value, though much of that was with premium brands, so the volume growth was lower, at 3.6%.

Among brands, Chivas Regal was up by 6%, Ballentine’s by 7%, the Glenlivet single malt rose 9% over the year and Royal Salute was up 16%.

The new headquarters is in Glasgow’s Blythswood Square

Growth was seen across most of the world, though there was a 3% fall in Europe, with problems in the French and Spanish markets.

The company will next year consolidate its London offices at one location in Chiswick, while expanding visitor centres at its Glenlivet and Strathisla distilleries on Speyside.

It is increasing distilling capacity at the Aberlour distillery, Glenlivet and Scapa on Orkney.

The new Glasgow office, on three storeys in a Blythswood Square town house, brings office staff from the Paisley bottling plant. Its ground floor is a modern bar area, for use in promoting its brands.

It was visited this week by the chief executive of Pernod Ricard, Alexandre Ricard, and the boss of its Chivas Brothers division, Jean-Cristophe Coutures.

A modern bar is part of the new headquarters

Mr Coutures told a media briefing that preparations have been made for packaging supplies if there is disruption to trade due to Brexit.

“As a business, we want visibility. It’s very difficult to forecast and plan for the unknown,” he commented.

He said the rise in exports of Scotch were not skewed by stock-piling in countries where tariffs could be introduced post-Brexit, such as Colombia and South Korea. Instead, he expects to see continued growth in the whisky trade.

That introduction of a post-Brexit tariff could put Irish whiskey at an advantage in such markets, but Alex Ricard doubted that would significantly harm the relatively strong market position of Scotch.

One of the company’s aims is to cut its carbon footprint by half over the next 11 years. That is through procurement that emphasises sustainable agriculture, recylable packaging and support for community efforts.