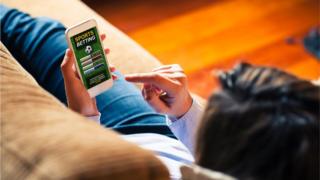 The head of mental health services in England has written to five major gambling companies, demanding urgent action on tackling gambling addiction and its impact on people’s health.

Claire Murdoch said incentives such as free bets and tickets should be banned to stop the “vicious gambling cycle”.

The industry said it was determined to make gambling safer.

Bets using credit cards are to be banned from 14 April, and the regulator is investigating “bet to view” schemes.

In her letter to the chief executives of William Hill, BetFred, bet365, GVC and Flutter, Ms Murdoch said she was worried that problem gamblers were being targeted.

“I am concerned that offering people who are losing vast sums of money… free tickets, VIP experiences, and free bets, all proactively prompt people back into the vicious gambling cycle which many want to escape.”

As a nurse of more than 30 years’ experience, Ms Murdoch said she had “seen first-hand the devastating impact on the mental wellbeing of addiction”.

“The gambling industry has a responsibility to prevent the occasional flutter turning into a dangerous habit,” she added.

In particular, Ms Murdoch criticised the practice of offering problem gamblers extra incentives to encourage them to spend more money.

And she said betting firms should stop streaming live matches, to prevent people building up debts they cannot afford.

“Bet to view” streaming is accused of turning fans into gamblers by making them place a bet to watch sports matches, and the Gambling Commission is currently investigating a deal to show FA Cup ties via seven betting sites.

“The links between the sporting industry and gambling are deeply disturbing, and the tactics used by some firms are shameful,” Ms Murdoch added.

“It is high time sporting bodies get back to their roots and start focussing on fans and families enjoying watching their heroes play, rather than allowing firms to hijack sport in pursuit of profit.”

Twenty-seven out of the 44 football clubs in England’s top two divisions are currently sponsored by a gambling company.

The Betting and Gaming Council, which represents betting shops, online gaming businesses and casinos, said it took its responsibility to customers “incredibly seriously” and was determined to make gambling safer.

It said had already introduced new age-verification checks and a ban on gambling advertising during matches.

The organisation said it was happy to meet Ms Murdoch to discuss her concerns.

A total of 14 NHS clinics for treating gambling addiction have been planned in England, with the first one in London also offering help for children from the age of 13.

This is in response to about 430,000 people having a serious betting problem.

The GamCare charity, which provides support for problem gamblers and their families, said more people were calling their helpline and more were receiving treatment – up 9% to 9,049 in 2018-19.

Online gambling, including betting, casino games and slots, was a problem for more than half of those who called their helpline.